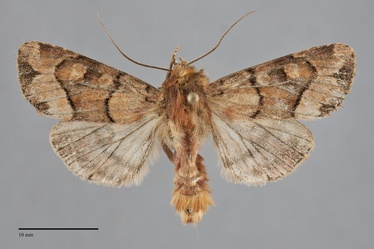 Apamea contradicta is a beautiful and distinctive, medium-sized to large moth (FW length 19–21 mm) that flies in British Columbia during the summer. It has rich orange-brown forewings and black lines. The forewing is orange-brown, darker in the median area and lightest at the apex. The rest of the terminal area is dark gray. The transverse lines are black, thick. The basal line is short, excurved. The antemedial line is oriented nearly perpendicular to the trailing margin, drawn slightly toward the base in the cell and incurved at the posterior margin. The median line is dark gray, diffuse. The postmedial line is weakly scalloped, smoothly curved around the reniform spot and angled toward the base below the spot to meet the median line at the margin. The subterminal line is pale orange-brown, irregular with a weak and blunted W-mark to the margin, preceded by a dark gray suffusion near the costa. The fringe is mottled orange-brown and dark gray. The orbicular and reniform spots are partially outlined in gray and filled with the light color of the wing base except darker orange-brown in the lower reniform spot. The claviform spot is faint or absent. The hindwing is pale tan suffused with powdery dark gray, with diffuse postmedial line, submarginal band, and discal spot, and darker gray veins and terminal line. The hindwing fringe is pale orange-brown. The head and thorax are orange-brown. The male antenna is bead-like.

This species is unmistakable due to its rich orange color with darker median area bordered by thick black lines.

This species has been collected in grassland with aspen groves in Alberta and central British Columbia. Mikkola et al. (2009) state that the habitat is conifer forest, bogs, and alpine meadows elsewhere.

Apamea contradicta has been found at several locations in south-central British Columbia as well as near Atlin in the far Northwest. It is probably more widespread in the eastern and northern parts of the province than these records suggest.

This is a boreal zone species that occurs across Canada to Labrador, Newfoundland, and southeastern Quebec. An apparently disjunct population is found in north-central Colorado. It is not known from elsewhere in the United States.

The early stages are unknown, but it is likely that the larva feeds on the roots of grasses (Poaceae) and sedges (Cyperaceae) like other members of the genus.

The flight period of A. contradicta is summer, usually in June and July. It is nocturnal and comes to light.