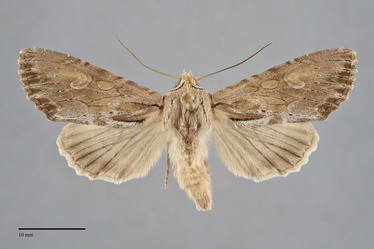 Apamea maxima is our largest Apamea species (FW length 23–29 mm). It is an orange-brown moth that flies on Pacific Ocean beaches, and it has large forewing spots that include a large claviform spot. The forewing is orange-brown ground color, darkest in the median area, with violet-gray shading near the trailing margin. A long black basal dash is present and there is a similar black line near the wing base along the trailing margin. A series of dark gray to black wedges are present on both sides of the pale subterminal line at the margin. The antemedial and postmedial lines are incomplete and indistinct. The orbicular, reniform and claviform spots are black and filled with a pale shade of the ground color. The claviform spot is large, spanning the median area to the postmedial line. The hindwing is dirty yellow-tan with darker gray suffusion near the margin and dark-brown veins. The head and thorax are tan with black across the collar and near the margins of the tegulae. The male antenna is filiform.

This species can be identified readily in its seaside habitat by its large size, light orange tan color, and large claviform spot.

This species is narrowly endemic to coastal marshes and wetlands near the ocean, and along the riparian zone of creeks and rivers near the ocean in close association with the larval foodplant.

In the Pacific Northwest, this species can be found along the immediate West Coast from Haida Gwai (Queen Charlotte Islands), British Columbia through Washington and Oregon.

The range of this species extends south to central California near San Francisco Bay.

This species is a foodplant specialist feeding on a large, coastal wetland grass, Pacific reed grass (Calamagrostis nutkaensis) in the Poaceae.  The larva is a soil-surface feeding cutworm that burrows into the sand in coastal habitats.

Adults fly from mid-May to August in the Pacific Northwest. They are nocturnal and come to lights.