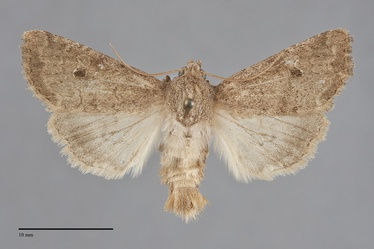 Apamea lutosa is a rarely-collected medium-sized moth (FW length 15–19 mm) with a light grayish ochre forewing with a gray spot in the lower reniform spot and otherwise ill-defined forewing pattern that flies in south-central British Columbia and central Washington during the summer. The forewing margin is weakly scalloped. The color is pale yellow-tan with light gray suffusion, slightly darker gray along the costa and in the terminal area. The lines are a slightly darker shade of the same color, faint and indistinct. The postmedial line is most evident, scalloped with dark lines on the veins at the tips of the teeth, smoothly curved around the reniform spot and then straight at an oblique angle toward the base. A faint gray median line is evident in some specimens. The subterminal line is pale, usually evident across the wing, sinuous, with a slight offset below the apex and a weak W-mark on the mid-wing. It is preceded by a light gray shade on the costa. The terminal line is dark, thin, sometimes forming dark triangles between the veins. The fringe is gray-tan. The orbicular spot is very faint, a slanted oval filled with the ground color. The reniform spot is kidney-shaped, filled with gray at the posterior end and lighter gray or nearly white scales anteriorly. No claviform spot is evident. The hindwing is gray-tan off-white with gray marginal suffusion and light gray discal spot, veins, and terminal line. The hindwing fringe is off-white with an ochre and gray base. The head and thorax are even gray-tan. The male antenna is bead-like.

This species can be identified by its pale gray-yellow color and reduced pattern dominated by the gray spot in the lower reniform spot. It is most similar to Apamea inficita in the genus. This species is brighter orange in color and has better-defined lines and spots. It typically flies at higher elevations in wetter environments than A. lutosa. Anarta trifolii is similar in size and has a dark reniform spot. As a member of the tribe Hadenini it has fine hairs on its eyes that are absent in Apamea. Its forewing pattern is much better defined than that of A. lutosa,with dark-rimmed orbicular and claviform spots.

This species is uncommon to rare throughout much of its range, including in the Pacific Northwest.  The localities of the two known records from our area suggests that it flies in pine forests or bunchgrass steppe.

Apamea lutosa has been found at two sites in our area, at Peachland in the Okanagan region of British Columbia and in Yakima County, Washington.

This species is predominantly found in eastern and central North America. It occurs from southern Canada to Maryland, Ohio, and Kansas. There are no records west of the Black Hills in South Dakota other than the two from the Northwest.

The flight period of A. lutosa is the summer, with most records from June and July across its range. It is nocturnal and comes to lights.