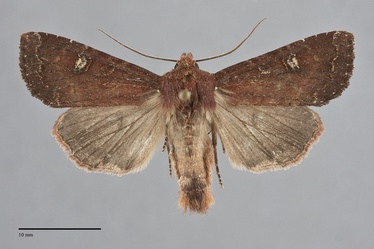 Apamea cogitata is a common, medium-sized moth (FW length 18–20 mm) that flies in forests and wetlands during the summer. It has dark red-brown forewings with light ochre filling of the reniform spot. The outer margin of the forewing is weakly scalloped. The forewing is even dark brick-red, slightly darker and grayer on the costa and near the outer margin. Some specimens have lighter orange-red or ochre distal to the reniform spot. The basal, antemedial, and postmedial lines are dark red-brown with slightly paler filling but are usually only evident on the costa where the filling is light gray. A faint dark median line parallels the postmedial line below the cell when evident. The subterminal line is powdery pale gray or ochre, irregular with a weak W-mark on M3 and CuA1. The fringe is concolorous. The orbicular spot is outline with dark red-brown and is faint. It is sometimes filled with a few pale scales. The reniform spot is kidney-shaped with slightly longer lower half, partially outline and filled with light to medium ochre scales and a thin gray central crescent. The claviform spot is dark red-brown, faint. The hindwing is tan-gray, darker gray toward the outer margin, with slightly darker gray discal spot and vein, and terminal line. The hindwing fringe is pale tan with a distinct pink tint. The head and thorax are dark red-brown. The male antenna is beaded.

This species can usually be identified by the combination of medium size, uniform brick-red color, and ochre and gray-filled reniform spot. Apamea scoparia is similar but usually larger with a forewing length greater than 20 mm. The pale scales in its reniform are around the perimeter and not in the center of the spot, and its forewing lines are better defined with dark spots on the tips of the teeth. Some forms of Helotropha reniformis resemble A. scoparia, but it is darker brown with a dark gray terminal area.

Apamea cogitata is widespread in the Northwest, occurring on both sides of the Cascade and Coast Mountains to northern British Columbia. It appears to be absent from southeastern Oregon and adjacent Idaho, although it has been collected on the Snake River Plain further east.

This species is found in most of boreal and montane North America north of Mexico. It occurs from Alaska to Labrador in the north, ranging to near the tree limit. The southern limit of its range is New York, southern Ontario, and northern Wisconsin in the East. Its range extends south in the western mountains, reaching Colorado, southern Arizona, and southern California.

The flight period of this moth is the summer. The flight season is fairly long, extending from early June to September, with a peak in July and early August. It is nocturnal and comes to lights.

This species is a minor pest in pastures and agricultural grasslands, particularly in seed crops of Kentucky blue grass (Poa pratensis) east of the Cascades.