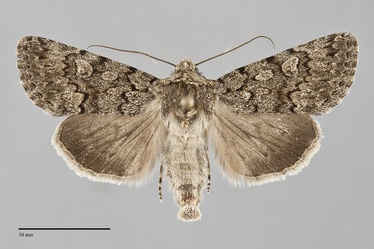 Sympistis acheron is a medium-sized moth (FW length 15 - 18 mm) that flies in mountain forests during the summer. It has hoary brown forewings with dark lines and spots - including an oval orbicular spot and strong dark and pale markings on the distal wing - and a dark brown-gray hindwing. The apex of the forewing is slightly elongate and the outer margin is smoothly convex. The ground color is strongly powdery to hoary olive brown, slightly variable in darkness. The distal wing is slightly darker gray from the lateral subterminal area to the outer margin. A dark line connects the spots in the cell in a few specimens. The basal, antemedial, median, and postmedial lines are black, with light ground color along the antemedial and postmedial lines outside the median area. The basal line is short and curved. The antemedial line is transverse across the wing, drawn sharply toward the base on the veins. The median line is diffuse, usually evident across the wing but darkest on the costa and below the cell. The posterior portion is near the postmedial line and slightly irregular. The postmedial line is strongly scalloped, bluntly excurved around the reniform spot and sometimes touching its bottom, then curved to meet the trailing margin at a right angle. The subterminal line is pale brown, irregular and broken into ill-defined pale spots between veins, preceded by long black wedge-shaped marks between the veins across the wing and sometimes followed by black spots in the terminal area. The terminal line is a black line or series of spots. The fringe is dark gray-brown. The orbicular and reniform spots are black on the outside with an inner line of pale brown and filling of the ground color or light brown. Both are strongest on the medial and lateral sides. The orbicular spot is oval and the reniform spot is wide, often incomplete at the anterior and posterior ends. The claviform spot is absent or partially evident at its apex. The hindwing is dark gray-brown, gradually darkening toward the outer margin. The veins, discal spot, and thin terminal line are darker gray. The fringe has a yellow base, thin gray median line, and a whitish tan edge. The head and thorax are the same color as the forewing, with darker transverse barring on the collar. The male antenna is filiform.

This species and Sympistis glennyi are closely similar in superficial appearance and often fly together. The hindwing of S. acheron is darker than that of S. glennyi and lacks a well-defined marginal band. The forewing of S. acheron is hoarier and usually darker than that of S. glennyi, with streakier pattern of pale spots and dark wedges near the outer margin. In the male genitalia, the position of the clasper of the valve differs between these species: That of S. glennyi is located past the midpoint of the valve, while that of S. acheron arises on the medial half. Both of these species resemble several brown Anarta and Euxoa species with which they fly. Structurally, these two Sympistis species can be distinguished by large claw-like setae on the foretibiae, and they also lack eye hairs that are found in Anarta. They can also be distinguished by details of the pattern, including that the antemedial line of Sympistis is a single dark line and those of the other species are double.

Troubridge (2008) distinguished two similar species in our area, S. acheron and Sympistis cocytus. According to him, S. cocytus is lighter and more contrastingly marked in the northern part of its range (southern British Columbia) but darker and more like S. glennyi further to the south in southeastern Washington and northeastern Oregon. They reportedly also differ in the orientation of the apical clasper of the male valve. We accept that there is considerable variation in our region but cannot reliably sort our material into more than a single variable species which we call S. acheron. Further study might validate Troubridge's opinion that two cryptic species are involved.

This species is widely distributed in conifer forests of subalpine fir, Douglas fir, and ponderosa pine at middle to high elevations in the Rocky Mountains, Cascades, and Siskiyou Mountains.  It is usually uncommon and sporadic, but may be locally frequent.

Sympistis acheron is widespread in the mountains of our region as far north as the southern third of British Columbia. It occurs in the Cascades, Siskiyou Mountains, Blue Mountains, and various ranges in the western Rocky Mountains.

No information is presently available regarding larval foodplants of this species. The suspected foodplant is penstemon (Penstemon spp.) in the Scrophulariaceae based on habitat and the preferences of related species.

The flight period of S. acheron is late summer and fall, beginning in late July in the Northwest. It is nocturnal and comes readily to lights.