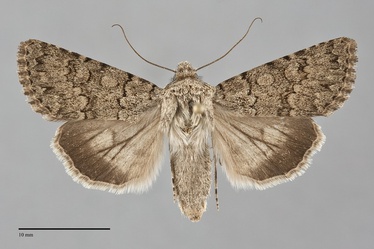 Sympistis glennyi is a medium-sized moth (FW length 15 - 17 mm) that flies in mountain forests during the summer. It has even, lightly powdery to smooth brown forewings with dark lines and spots - including an oval orbicular spot and wide orbicular spot - and a light tan hindwing with a sharply defined marginal band. The apex of the forewing is slightly elongate and the outer margin is smoothly convex. The ground color is nearly even slightly grayish brown, usually somewhat powdery due to a mixture of light and dark scales. The cell between the spots is dark in a few specimens. The basal, antemedial, median, and postmedial lines are dark gray to black, with a component of slightly lighter than the ground color along the antemedial and postmedial lines outside the median area. The basal line is short and curved. The antemedial line is transverse across the wing, moderately zigzagged, especially the posterior half. The median line is variable, usually strongest on the costa and posterior wing where it is scalloped parallel and close to the postmedial line. The postmedial line is moderately strongly scalloped, located very close to the reniform spot and often touching its top and bottom as it curves around it, then oblique to the trailing margin. The subterminal line is pale brown, irregular and roughly parallel to the outer margin, preceded by several gray wedge-shaped marks between the veins that are strongest near the costal margin and between veins M3 and CuA1. The terminal line is a series of dark gray ellipses. The fringe is gray-brown with weak gray checkering on the margin. The orbicular and reniform spots are black, strongest on the medial and lateral sides, filled with the ground color or slightly lighter brown. The orbicular spot is oval and the reniform spot is wide, often incomplete inferiorly. The claviform spot is absent or partially evident at its apex. The hindwing is gray-tan with dark brown-gray veins, thin discal spot, thin postmedial line, and a sharply-defined marginal band. The fringe has a yellow base, thin gray median line, and a whitish tan edge. The head and thorax are the same color as the forewing, with a slightly darker gray edge on the collar. The male antenna is filiform.

This species and Sympistis acheron are closely similar in superficial appearance and often fly together. The median margin of the hindwing marginal band is better defined in S. glennyi and the forewing is lighter, purer brown in color, and less hoary. The distal wing of S. acheron is usually darker gray than the rest of the wing, not darker in S glennyi, and the wedges in the subterminal area are usually better developed. In the male genitalia, the position of the clasper of the valve differs between these species: that of S. glennyi is located past the midpoint of the valve, while that of S. acheron is short and arises on the medial half. Both of these species resemble several brown Anarta and Euxoa species with which they fly. Structurally, these two Sympistis species can be distinguished by large claw-like setae on the foretibiae, and they also lack eye hairs that are found in Anarta. They can also be distinguished by pattern, since the antemedial line of Sympistis is comprised of a single line, and those of the other species are double.

The type locality of the synonym Oncocnemis phairi McDunnough is British Columbia, Lillooet.

This species is found in higher elevation conifer forests or high mountain meadows of the Cascades and Rocky Mountains, although it also occurs in canyonlands at lower elevations east of the Cascades.  It appears to be rare and sporadic.

This species is found in the North American West. It occurs from southwestern Alberta to Colorado in the Rocky Mountains, in the mountains of Utah and California, and in California.

No information is presently available regarding larval foodplants of this species. Penstemons (Penstemon spp.) in the Scrophulariaceae are a likely possibility given the habitat and preferences of several related species.

This species flies in late summer and fall, with records from mid-July to mid-September. It is nocturnal and comes to light.