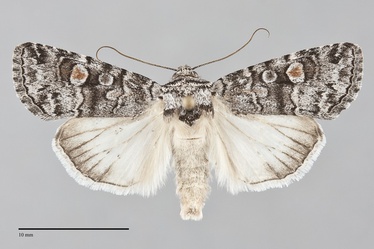 Sympistis dunbari is a small (FW length 13 - 15 mm), mottled, blue-gray moth that flies in dry forests throughout much of the Northwest during late summer and fall. It has dark, red scales in the reniform and orbicular spots and a pale gray hindwing. The forewing is moderately mottled blue-gray, slightly darker in the median area and in the terminal area. The mottling is greatest on the distal wing, with patchy dark gray preceding and following the subterminal line, darkest on the costa and at the anal angle in both areas where it forms indistinct spots. The basal, antemedial, and postmedial lines are dark gray, double with light gray filling. The antemedial line is slightly irregular and slightly oblique from anteromedial to posterolateral. The postmedial line is very weakly scalloped, drawn sharply toward the base at the costa, excurved around the reniform spot with apex near the costa, touching the lower reniform spot where it is bent to extend to meet the trailing margin at a right angle. The median line is dark gray, running through the lateral portion of the orbicular spot. The subterminal line is light gray similar to the filling of the lines, finely dentate across the mid-wing and straighter near the anterior and posterior margins. The terminal line is dark gray. The fringe is weakly checkered light and dark gray. The orbicular and reniform spots are similar, dark gray with light gray peripheral and dark gray and red central filling. The orbicular spot is round with a mostly gray central ocellus. The reniform spot is moderately wide, kidney-shaped, filled mostly with red. The claviform spot is less prominent than the other spots, small, gray with pale filling. The hindwing is light whitish gray with patchy darker gray marginal band, weak discal spot, dark gray veins with darker spots at the position of the postmedial line, and a thin dark terminal line. The hindwing fringe is white with a pale gray base. The head and thorax are gray with pale and dark gray bands across the base and tip of the collar. The male antenna is filiform.

This species is most similar to Sympistis definita, which has a nearly identical pattern but paler color. It replaces S. dunbari in the deserts of southeastern Oregon. These could potentially be subspecies of the same species. Sympistis meadiana is widespread and its range and that of S. dunbari overlap east of the Cascades. In S. meadiana, the part of the postmedial line distal to the reniform spot is very faint and is located close to the spot, unlike that of S. dunbari, in which this segment is separate from the spot and similar in strength to the rest of the line. There is much greater contrast between the dark median area and the light gray on the rest of the wing in S. meadiana than in S. dunbari. Lithomoia napaea, an overwintering member of the tribe Xylenini in the subfamily Noctuinae, is similar in size, wing shape, and color to S. dunbari. Red-brown color on its wing is adjacent to rather than inside the spot and it has a very dark straight median line that is much more prominent than that of S. dunbari.

The larva is smooth and green with a series of fine white dorsal and lateral lines.  It is illustrated by Miller and Hammond (2003).

The range of this species extends south through California and the Great Basin to southern California, Arizona, and New Mexico. It has also been recorded from Colorado.

The flight period of S. dunbari is late summer and fall, peaking in late August and early September. The earliest records are from late July. This species flies at night and is attracted to lights.