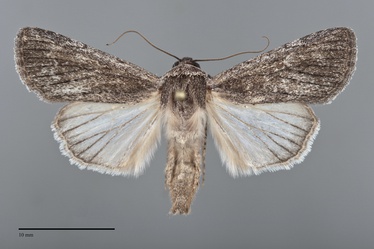 Sympistis astrigata is a medium sized (FW length 14–17 mm), plain, brownish-gray moth with black head and anterior collar that flies in south-central Oregon during early fall. The forewing is nearly unmarked powdery brown gray with powdery gray along the anterior margin. Dark markings are reduced to thin dark veins on the distal third of the wings, and dark margins at the line origin on the costa in some specimens. The position of the postmedial line is slightly paler gray similar to the costa in a few individuals. The hindwing is slightly translucent off white with brown gray near the margin, dark veins, and thin dark terminal line. The hindwing fringe is pale with a thin dark line through it. The head and collar base are similar brown black, with the rest of the collar lighter gray with a slightly darker gray band near the apex. The remainder of the thorax is the color of the forewing. The antennae of both sexes are filiform.

This moth can be identified by the combination of its unmarked brown gray forewing and contrasting blackish head and collar base. Similar species of Sympistis lack this combination of characters and tend to have black forewing lines, a longitudinal streaked forewing, or a gray head.

Sympistis astrigata has only been collected in rocky shrub steppe in Oregon. It occurs in dry forest in other parts of its range.

This species has been found in Klamath County, Oregon in the Pacific Northwest, where several specimens were collected by Mike Raschko.

The range of S. astrigata includes most of California, adjacent southeastern Utah, Arizona, and Colorado.

Early stages are unknown. It probably feeds on beardtongue (Penstemon spp.) like many other Sympistis species.

The only record of this moth from the Pacific Northwest is from early September. It has a long flight parts of its range, with records from late spring to early fall.