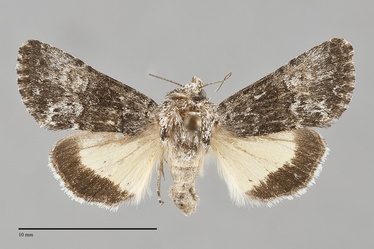 Sympistis corusca is a small (FW length 11 mm) noctuid moth that flies in the deserts of eastern Oregon and southern Idaho in June. It has dark gray forewings, with lighter gray in the reniform spot and adjacent anterior subterminal area, and yellow and black hindwings. The forewing is charcoal gray, with a quadrate diffuse light gray patch on the anterior wing between the medial and posterior reniform spot, distal subterminal area, and the costa. Some similar light gray is also present in the basal area and in the posterior subterminal area near white segments of the postmedial and subterminal lines. A black dot is present at the central wing base. The basal line is black, white the antemedial and median lines are obscure or absent. The postmedial line is faint gray around the end of the cell, stronger slightly scalloped medial black and lateral white near the trailing margin. The subterminal line is pale, nearly absent, except for a stronger white segment near the anal angle. The terminal line is black. The fringe is dark gray. The reniform spot is wide and ovoid, with a dark gray medial wall, and light whitish gray filling with a faint gray lunule on the medial side. The orbicular and claviform spots are absent. The hindwing is light to bright yellow with gray suffusion on the anterior margin, an even-width well-defined black marginal band, and a tri-colored yellow, gray, and white fringe. The head and thorax are hoary gray. The male antenna is filiform.

This is one of the earliest Sympistis species to appear, flying in June. Other species in the genus with yellow hindwings fly in the fall and can be separated by collection dates alone. Similarly, species of Pseudanarta, which also have black-banded yellow hindwings and fly in the desert, do not appear until August or September. The forewing pattern with light gray patch on the anterior distal wing that includes the filling of the reniform spot and indistinct lines is diagnostic of this species.

This is a relatively uncommon to rare species that is sporadically distributed in juniper woodlands at middle elevations east of the Cascades.

Sympistis corusca is uncommonly collected in our region. It has only been found along the east slope of the Cascades in Oregon and in southern Idaho.

The range of this species includes California, Nevada, Arizona, and Wyoming.

Specimens in the Los Angeles County Museum have been reared from Diplacus fremontii in the Phrymaceae (D. Wikle, pers. comm. 2019). Several Diplacus species, including D. jepsonii, occur in the Pacific Northwest and are the likely food plants of this moth. This is the only Sympistis in our region that feeds on plants of this family.

The flight period of S. corusca is June and early July. It is nocturnal and comes to light..