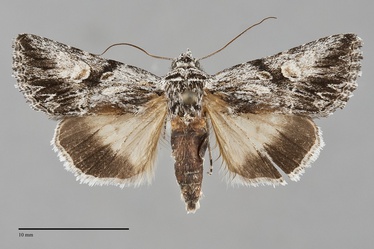 Sympistis sagittata is a pale gray, small moth (FW length 14 mm) that flies in southeastern Oregon during the fall. It has a blackish gray median line and terminal area on the forewing and a light tan hindwing with a dark gray marginal band. The forewing is powdery silver gray, slightly darker on the base of the wing. Most of the subterminal area is dark gray and black from the apex to the trailing margin. A thin black basal dash is present. The antemedial line is double, gray and black with light gray filling, and is evident from the mid-wing to the trailing margin. The median line is black, wide, and oblique from the costa between the orbicular spots to the postmedial line at mid-wing, then absent from the posterior wing. The postmedial line is faint gray, double filled with white, slightly undulating, excurved around the reniform spot and then straight from the lower spot to the trailing margin. The pale subterminal line is strongly dentate with some of the teeth touching the margin, preceded by a series of black wedges between the veins that are strongest in the fold and followed by a single black terminal mark in the fold. The terminal line is pale gray. The fringe is light gray and gray, lightly checkered. The orbicular spot outlined in black with pale gray peripheral and a gray to light rust central ocellus. The reniform spot is wide and weakly kidney-shaped, outlined in black on the medial side and lacking an outline elsewhere, filled with light whitish gray peripherally and a rust-brown central lunule. The claviform spot is absent. The hindwing is light tan with light gray veins and faint discal spot. A wide, dark gray marginal band is present. The fringe is tricolored, yellow and gray with a white edge. The head and thorax are grizzled gray with black and light gray banding on the collar and dark margins on the tegulae. The male antenna is filiform.

This species is only likely to be confused with Sympistis saxatilis, a species with a rust colored reniform spot and a large pale area distal to this spot. It lacks the dark oblique median line and sawtooth subterminal line of S. sagittata. Its hindwing is paler cream-colored with a larger discal spot and black rather than dark gray marginal band. The ventral side of S. saxatilis has broad jet-black bands on the distal wing while that of S. satittata has lighter gray bands, particularly on the ventral forewing.

This species appears to be very rare and sporadic on open sagebrush steppe and in juniper woodlands of the Great Basin at low to middle elevations.

This species is known from the Great Basin region of east-central Oregon in our region where it has been found as far north as Deschutes County.

This species appears to be endemic to the Great Basin region of the western United States.

The flight period of S. sagittata is fall. It is nocturnal and comes to lights.