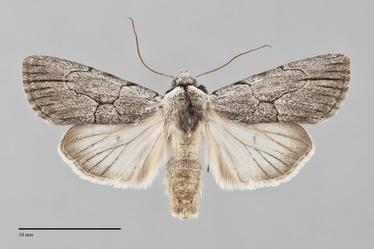 Sympistis semicollaris is one of six similar gray Sympistis species with an H-shaped pattern of connected antemedial and postmedial lines and is the only one with a gray head. All are members of the Sympistis atricollaris species-group. It is small (FW length 13–15 mm) with a powdery steel gray forewing, slightly darker toward the outer margin. A thin dash is present at the wing base at the cell, and a series of parallel black lines are present on the distal wing, and darkest and extending across the postmedial line between veins M1 and M2. The antemedial and postmedial lines are thin, black, joined by a similar thickness longitudinal line across the median area in the fold. The antemedial line is angled with the apex at the transverse line connecting it to the postmedial line. The postmedial line is sinuous, strongly and evenly excurved around the end of the cell, drawn sharply from the lower end of the cell to the median bar connecting it to the antemedial line, and nearly straight to meet the trailing margin at a right angle. The basal line, median line, subterminal line, and all three spots are absent. The hindwing is pale whitish gray in males, light gray in females, with a faint discal spot and dark gray veins and terminal line. The hindwing fringe is pale gray with a gray base. The head is gray. The collar is gray with a black base that extends dorsally in the midline to a median point. The rest of the thorax matches the forewing ground color. The male antenna is filiform.

This species is most similar to Sympistis greyi and Sympistis figurata. It differes from both of them in having a gray head, black in the other two species. The forewing is longer and more uniform in color than that of S. greyi and lighter gray and less streaky than that of S. figurata.

This species is found in dry forests from sea level to middle elevations in the mountains of Washington, but is more restricted to high elevation subalpine forests in the Cascades of Oregon.

Sympistis semicollaris is widespread in dry forests throughout our region. Its range is most restricted west of the Cascade Range where it is found near the Gulf of Georgia in southwestern British Columbia and northwestern Washington.  The northern limit is in central British Columbia near Williams Lake.

The range of this species extends to California and Arizona.

This species flies during the summer, with collection dates from late May through July in our region. The flight period is slightly earlier in the year than S. figurata, in part S. semicollaris flies at lower elevation.