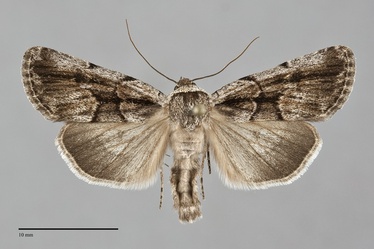 Sympistis fifia is medium-sized, streaky, brown and gray moth (FW length 14–16 mm) that flies in forests east of the Cascade and Coast Range crests as far north as 52 degrees North latitude during the summer. It has black dashes from the base to the postmedial line in the fold and through the cell—including through the spots—to the outer margin. The ground color is powdery brownish gray, strongly suffused with dark brown to blackish brown on much of the wing from the base to the subterminal line in most Pacific Northwest populations; however, those from eastern Idaho are powdery medium-gray with less brown color. The brown is most solid in the mid- and posterior median area and mid-basal area, and streakier in the subterminal area. The distal veins are slightly darker in some specimens. Indistinct thick black lines extend from the base to the postmedial line in the fold and from the antemedial line to the outer margin through the cell, traversing both of the spots. The basal line is absent or reduced to a dot on the costa. The antemedial and postmedial lines are similar, smooth, black with light brown-gray on the side outside the median area. The antemedial line is thickened at the costa, smoothly excurved, sometimes slightly irregular near the costa and drawn slightly toward the base where is is crossed by the dash. The postmedial line form is perpendicular to the costa where it is thickened, then strongly and bluntly curved around the end of the cell to the fold, then turned slightly toward the outer margin. The segment near the outer reniform spot is thin, largely obscured by the crossing black line, while the posterior segment is thick. The subterminal line is pale, irregular, mostly evident as the transition between the dark brown subterminal area and the lighter terminal area. Long black wedges are present between the veins medial to this line, longest on the mid-wing. The median line is absent. The terminal line is black, thickened between the veins. The fringe is gray-brown to brown, weakly checkered basally. The orbicular and reniform spots are pale gray-brown, nearly completely obscured by the traversing black line. The claviform spot is the distal end of the long basal dash. The hindwing is light brownish gray, with darker gray discal spot, thin postmedial line, marginal band just distal to the postmedial line, and a thin terminal line. The fringe is tri-colored, striped ochre, gray, and white. The collar is light brown-gray with a lighter edge and thin black median line. The head and remainder of the thorax are dark brown. The male antenna is filiform.

This species can be identified by the combination of smooth streaked gray and brown forewing with two black lines through the cell and on the basal half of the wing and a light gray collar that contrasts with the dark brown head and thorax. It is most similar to Sympistis dinalda, a species that is limited to eastern British Columbia in our region. S. dinalda has a similar pattern of dark lines and dashes to S. fifia, but is dusty gray without dark brown on the wing, head, or thorax.  Specimens of S. dinalda from southern Idaho fly with Sympistis utahensis, which is similar in size and also has black dashes at the base and in the cell.  The dash through its cell does not extend lateral to the reniform spot unlike that of S. fifia, and it also lacks transverse lines.

Populations of S. fifia are geographically variable in the Pacific Northwest. Those from eastern Idaho are lighter gray, less brown, and more powdery than those from elsewhere in the region.

This species is widely distributed throughout much of western North America in various forest habitats at middle elevations.  In the Pacific Northwest, it is usually fairly common in mixed conifer-hardwood forests or open ponderosa pine forests.

Sympistis filia is fairly widely distributed in forests east of the Coast and Cascade Range divides at least as far north as the southern third of British Columbia. It does not occur west of the Cascades in British Columbia and Washington. The distribution is limited to the Blue Mountains and Steens Mountain in Oregon.

The range of this species is from California east to Utah and Colorado to the south of the Northwest region.

Sympistis fifia flies during the early and mid-summer, with capture dates from early June to early August in the Pacific Northwest. It is a nocturnal species that comes to lights.