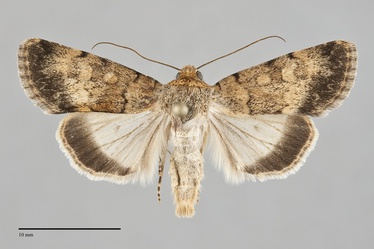 Sympistis hathor is a medium-sized moth (FW length 14 - 16 mm) that flies near basalt rimrock in southeastern Oregon during the fall. It has orange-brown forewings with dark gray distally and light-filled spots and a black-banded pearly white hindwing. The forewing is powdery orange-brown, slightly darker in the median area, lighter in the medial subterminal area, and much darker brown-gray distal to the mid-subterminal area. All of the lines except the subterminal line are dark gray, thickened to spots on the costa at the antemedial, median, and postmedial lines. The basal line is short, located near the wing base. The antemedial line is sinuous, oblique from anteromedial to posterolateral. The median line is variable, usually darkest near the on the costa and posterior half of the wing. The postmedial line is faint below the costa, often only evident as the transition from darker median area to the light medial subterminal area. The subterminal line is the ground color, patchy, incomplete, and irregular. The terminal line is the ground color and dark gray. The fringe is weakly checkered orange brown and gray. The orbicular and reniform spots are thin, gray, and filled with a light shade of the ground color. The orbicular spot is oval and the reniform spot is kidney-shaped. The claviform spot is absent. The hindwing is pearlescent light gray with dark veins and a well-demarcated even dark gray marginal band. The hindwing fringe is tricolored with yellow and gray basal and white distal components. The head and collar are orange-brown, with the rest of the thorax gray-tan. The male antenna is filiform.

This species can be identified by its orange-brown color forewing and banded white hindwing. The most similar species in southeastern Oregon is Sympistis pallida. It is gray rather than orange-brown with lighter gray distal forewing and hindwing marginal band.

This species appears to be rare and sporadic near basalt cliffs and rimrock in steppe habitats at low elevations in the Great Basin region. It can be locally common in the proper habitat.

Sympistis hathor has been found at a few locations in east-central and southeastern Oregon.

This species is not known to us from outside of Oregon.

No information is presently available regarding larval foodplants of this species. A possible foodplant is Desert Goat's Beard (Holodiscus microphyllus) (Rosaceae) based on use of Holodiscus by related Sympistis species and the presence of this plant at locations where this moth is most common.

This species flies from late August to mid-September. It is nocturnal and comes to light.