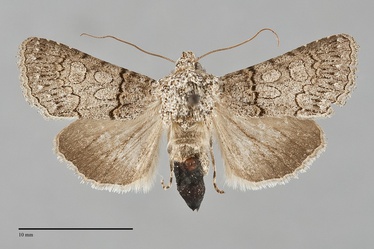 Sympistis perscripta is a small (FW length 13 - 14 mm), slightly powdery even gray moth that flies in southern Idaho during the spring. It has paired black and brown antemedial and postmedial lines and a pale hindwing with dark veins and marginal band. The forewing color is nearly even across the wing, with an even dusting of black scales outside of the median area. The basal line is thin and gray. The antemedial and postmedial lines are paired, black adjacent to the median area and brown outside this area. The antemedial line is slightly waved and oriented nearly straight across the wing. The postmedial line is slightly lighter than the antemedial line with scalloped black and smooth brown components, smoothly excurved around the cell and then curved to meet the trailing margin at a slight angle toward the base. The median line is gray, faint except on the costa, running through the medial reniform spot. The subterminal line is a series of similar-size pale spots parallel to the outer margin, preceded by black short thin lines between the veins. The outer margin is slightly scalloped with a thin black terminal line. The fringe is gray with a slightly darker median line. The outlines of the three spots are thin and black. The orbicular spot is oval, filled with the ground color and a very faint central ocellus. The reniform spot ovoid, wide, and filled with the ground color. The claviform spot is large, wide, and broad, forming a long thin loop in the median area that is filled with the ground color. The hindwing is light whitish gray in males, darker gray in females, with blackish gray veins, thin discal spot, and ill-defined marginal band. The hindwing fringe is white with a yellow and gray-lined base. The head and thorax are gray with scattered small black spots and a thin transverse line across the mid-collar. The male antenna is filiform.

This species can be identified by its even gray color, black and brown forewing lines, and thin spots with a widely looping claviform spot.

This species is widely distributed in open dry habitats throughout much of North America.  It is seldom collected in the Northwest, possibly because of its early flight season.  In California and western Oregon, it occupies dry grasslands and oak savanna at low elevations.  In the Great Basin region, it uses dry, open sagebrush steppe.

This species is found across the southern half of North America. The range extends north to southern New England in the East and Michigan in the Midwest.

This species is a foodplant specialist feeding on various kinds of Scrophulariaceae, including Linaria canadensis.

This species usually flies during the spring, with Northwest records from April and May. Forbes (1954) states that it also flies in August in the East.