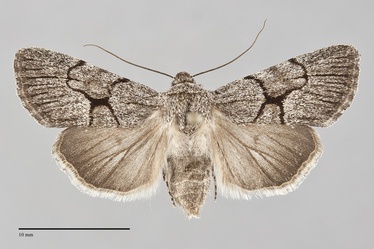 Sympistis figurata is the darkest gray of six similar species in the Sympistis atricollaris species-group that fly in our area, all of which have gray forewings with a black H-shaped mark. It is a small moth (FW length 13 - 15 mm) that flies in forests east of the Coast and Cascade crests during the summer. The ground color is powdery medium-dark gray, less smooth than in the other species. The distal wing is slightly darker, except that the terminal area is often mottled with lighter gray. The veins on the distal wing are dark gray. A thin black basal dash is usually but not always present, sometimes extending to a thicker black line that connects the antemedial and postmedial lines across the median area in the fold. A series of black lines are present at the margin, longest and thickest between veins M1 and M2 where it extends to or medial to the postmedial line. The transverse lines are black. The basal line is short and thin. The antemedial line is excurved with an angle, apex lateral, at the connecting line. The postmedial line is smoothly sinuous, originating at the distal third of the costa and curving around the end of the cell to meet the transverse line at mid-wing, turning to course to the trailing margin at nearly a right angle. A gray median line is usually present, but often only evident near the costa. The subterminal line and spots are absent. The hindwing is gray, darker toward the margin, with dark veins, thin discal spot, and thin terminal line. The hindwing fringe is tricolored, yellow, gray, and white. The head and base of the collar are brownish black. The rest of the collar is light gray with faint transverse barring. The rest of the thorax is gray. The male antenna is filiform.

This species is darker gray on both wings than the other similar species in the same species-group. The wings are less smooth, with more dark veins, mottling in the terminal area, and a median line that the other species lack. However, the most reliable distinguishing feature is the presence of a basal dash, lacking in the other species. Sympistis pallidior replaces S. figurata east of the Continental Divide and flies in northeastern British Columbia. S. pallidior is closely similar but is paler, has a smoother forewing, and lacks a basal dash.

This species is widely distributed in forests throughout much of western North America.  In the Pacific Northwest, it is relatively common in dry canyonlands and brushlands at middle elevations, as well as at higher elevations.

Sympistis figurata is widely distributed in mountain ranges throughout most of our region, generally as far west as the divides of the Coast and Cascade Ranges and as far north as south-central British Columbia. It occurs on isolated mountains in the Basin and Range Province. It has only been found in southern Idaho.

This species has the widest distribution of any member of its species group. It is found throughout most of California, and from there across the Intermountain Region to Colorado, New Mexico, and Texas. The range extends at least to Montana in the Rocky Mountains.

No information is presently available regarding larval foodplants of this species, but it probably feeds on snowberry (Symphoricarpos spp.) in the Caprifoliaceae based upon closely related species.

The flight period of S. figurata is summer, with records from late May to early August. It is most common in late June and early July. It is a nocturnal species that comes to lights.