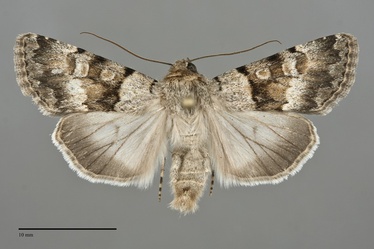 Sympistis pallida is a medium-sized moth (FW length 15 -17 mm) that flies in southeastern Oregon and southeastern Idaho during late summer and early fall. It has pale gray forewings with slightly darker median area, darker gray distal wing, and pale-filled spots. The forewing is dusty pale gray, darker gray with variable absent to slight orange-brown tint in the median area, lighter base, and whitish medial subterminal area. The distal subterminal area is more progressively darker gray to the subterminal line. The terminal area is uneven powdery gray. The transverse lines are black, thickest at the costa at the antemedial, median, and postmedial lines. The basal line is short near the wing base. The antemedial line is thick, slightly undulating and oblique from anteromedial to posterolateral, the median line is diffuse but irregular, excurved to the medial reniform spot in the cell and toothed near toward the outer margin on vein 1A+2A. The postmedial line is excurved near the reniform spot, touching the lower spot and curving below the spot to meet the trailing margin at a right angle. The subterminal line is variable in prominence, pale, diffuse, and jagged when strongly developed. The terminal line is a series of dark bars or triangles between veins. The fringe is striped at the base with a weakly checkered gray edge. The orbicular and reniform spots are outlined in thin dark gray to black but are most prominent due to filling of light gray to cream scales. The claviform spot is small and variable, ranging from absent to as dark as the antemedial line. The hindwing is pale pearly gray with dark veins and ill-defined marginal band. The fringe is tri-colored yellow, gray, and white. The head and collar are even orange-gray. The rest of the thorax is light brownish gray. The male antenna is filiform.

This species is most similar to Sympistis hathor in southeastern Oregon. It is strongly orange-brown rather than gray on the forewing, and has a darker and and more sharply-defined marginal band on the hindwing.

This is a rare species found at low to middle elevations in the Great Basin region.  It is known from dry, open sagebrush steppe in southeastern Oregon and open sage hills in dry forest in Idaho.

Sympistis pallida has been found in the southeastern parts of Idaho and Oregon in the Northwest. It is probably more widespread than these records suggest.  This species is found in mountains in northern Utah and California and should be sought in similar localities in southern Oregon such as in the Warner Mountains.

This species has been recorded from northern California and Utah outside of our region.

The flight period of S. pallida is August and September. It is nocturnal and comes to lights.