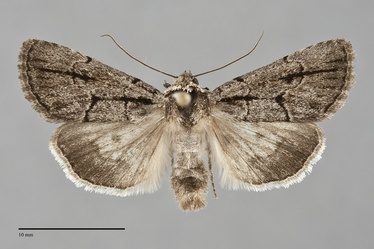 Sympistis dinalda is medium-sized, powdery brown-gray moth (FW length 15–17 mm) that flies in eastern and northern British Columbia during the summer. It has two black streaks from the base to the postmedial line in the fold and through the cell and reniform spot to the outer margin. The ground color is brownish gray with an even heavy sprinkling of black scales. It is slightly darker gray on the distal wing, especially in the subterminal area. A thick black dash extends from the base to the postmedial line in the fold and a slightly thinner black line extends from the orbicular spot to the outer margin through the cell, traversing the reniform spot. A black line is present just below the costa from the base to the antemedial line in some specimens. The basal line is absent or reduced to a dot on the costa. The antemedial and postmedial lines are similar, dusty thick black without more than a trace of a light component along the antemedial and postmedial lines. The antemedial line is thickened at the costa, smoothly excurved with a slightly indentation toward the base where is is crossed by the black dash. The postmedial line form is square to the costa, then bluntly excurved around the end of the cell to the end of the black dash in the fold, then oblique toward the anal angle to the trailing margin. The line is uneven in width, thickest at the costa and posterior to the fold. The subterminal line is absent, but its position is evident as a transition from the gray subterminal area to lighter terminal area in some specimens and by the ends of several thin black wedges located between the veins on the mid-wing. The median line is absent. The terminal line is black, thickened between the veins. The fringe is gray-brown, very weakly checkered. The oval orbicular spot is pale with a central ground color ocellus. The reniform spot is pale or a gray smudge or upright bar. The claviform spot is not identifiable, likely incorporated as a component of the black dash. The hindwing is light brownish gray, with darker gray discal spot, veins, thin postmedial line, ill-defined and incomplete marginal band, and thin terminal line. The hindwing fringe is tri-colored, yellow at the base with a white edge separated by a thin gray line. The collar is light brown-gray with a lighter edge and black base and thin median line. The head and remainder of the thorax are gray-brown. The male antenna is filiform.

Sympistis dinalda can be identified by its dusty gray color and distinctive pattern of black lines and the two dashes on the wing base and in the cell. It is most similar to Sympistis badistriga and Sympistis fifia. The latter species - which is widely distributed in the Northwest - is easily separated from S. dinalda by extensive dark brown on the wing, head, and thorax. Sympistis badistriga barely enters British Columbia but is more similar to S. dinalda. It has a slightly browner forewing that is streaked with slightly lighter lighter tones, and also has light components of the antemedial lines opposite the median area.

This species flies in open forest and shrubby grasslands with snowberry (Symphoricarpos spp.).

This species occurs across the northern boreal zone of North America (Troubridge 2008), reaching eastern Nova Scotia. The southern limits of its range are less clear due to past confusion with Sympistis kappa.

No information is presently available regarding larval foodplants of this species, but it probably feeds on snowberry (Symphoricarpos spp.) in the Caprifoliaceae based upon closely related species.

The flight period of this species is July in Alberta and British Columbia. It is nocturnal and comes to lights.