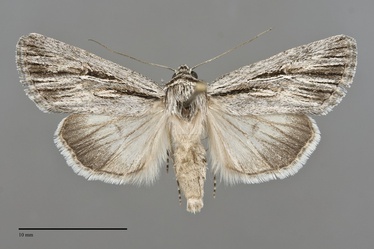 Sympistis utahensis is a small to medium-sized, longitudinally streaked, light gray moth (FW length 14–15 mm) that flies in southeastern Idaho during late summer and early fall. It has long black dashes at the base of a long light-filled claviform spot and inside the fused orbicular and reniform spots. The forewing is slightly powdery light gray, with a light tan tint distal to the cell and in the fold.  A series of ill-defined darker gray wedges extend through the distal subterminal area to the outer margin. Black dashes are present at the base, extending into the claviform spot, and filling the fused spots in the cell. A series of black lines are located between the veins on the outer part of the wing, lengthening from the apex to the anal angle. The terminal line is gray, thin, while none of the other transverse lines are evident. The fringe is gray, very weakly checkered. The spots are outlined in gray and are filled with white to cream in addition to the black marks described above. The orbicular spot is very long and diamond-shaped, fused to the triangular reniform spot. The claviform spot is moderately large and conspicuous due to its lighter filling at the end of the basal dash. The hindwing is gray-tan to off-white with dark gray veins, thin discal spot, and a moderately well-demarcated gray marginal band. The hindwing fringe is tricolored with a yellow and gray base and white edge. The head and thorax are gray with black bands on the base and edge of the collar. The male antenna is filiform.

This species can be recognized by its southern Idaho distribution, light gray color, long spots, black dashes at the base and in the spots in the cell, and streaked gray terminal area.  It is most similar to Sympistis fifia, which flies with it slightly earlier in the year.  This moth has a more powdery gray forewing with thicker and more diffuse dashes.  The black in the cell continues to the outer margin, unlike in S. utahensis, where it is confined to the interior of the spots.  Sympistis poliochroa flies with S. utahensis and has a streaked forewing pattern with similar spots.  It is more uniform blackish gray, lacks the contrasting black dash in the cell, has a strongly streaked terminal area without patches of darker gray, and a more strongly banded hindwing with a black marginal band.

The larva of S. utahensis is unknown.

This species has only been collected in open juniper forest with bunchgrass steppe and scattered rock outcrops in the Middle Basin and Range Ecoregion in our area.

Sympistis utahensis has only been found along the southern slope of the Black Pine Mountains in southern Idaho near the border with Utah.

This species appears to have a limited range in Utah and southern Idaho.

The early stages of this species are unknown.  Beardtoungue (Penstemon spp., Scrophulariaceae) is the most likely foodplant based on the preferences of many Sympistis species.

Adults of S. utahensis have only been collected during late August in our region.  They certainly also fly during early September and have been recorded as late as October at other locations.  This species is nocturnal and comes to light.