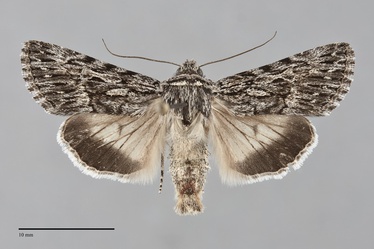 Sympistis poliochroa is a medium-sized (FW length 15–17 mm), heavily streaked gray and black moth that flies in dry forests east of the Cascade and Coast Ranges in the fall. It has fused orbicular and reniform spots and a pale hindwing with a black marginal band. The forewing is grizzled charcoal gray with a strongly longitudinally streaked appearance due to dark veins accentuating the longitudinal elements of the pattern. The distal wing is darker and less grizzled gray than elsewhere. A thin black basal dash extends to the antemedial line. The basal line is absent. The antemedial, median, and postmedial lines form similar dark oblique marks on the costa. The antemedial line line is light gray medially and dark gray adjacent to the median area, irregular but usually faint. The median line is gray, variably present below the cell. The postmedial line is dark gray abutting the median area and light gray laterally, moderately scalloped, drawn toward the base on the costa, bent sharply at the anterior cell to course obliquely across the rest of the wing to the trailing margin, touching the lower reniform spot. The subterminal line is pale gray and very irregular, evident between the veins where it is preceded by long black wedge-shaped marks and followed by black lines that extend to the outer margin. The terminal line is black. The fringe is dark gray or weakly to strongly checkered with light and dark gray. The spots have thin black and wider light gray inner outlines, which are filled with the ground color. The orbicular spot is elongate oval or diamond-shaped, fused to the medial reniform spot. The reniform spot is triangular or kidney-shaped. The claviform spot is large, reaching the postmedial line in most specimens. The hindwing is slightly brownish off-white with dark gray veins, thin discal spot, and a well-demarcated blackish gray marginal band. The hindwing fringe is tricolored with a yellow and gray inner line and white edge. The head and thorax are grizzled dark gray with dark and light gray bands on the collar, widest dark near the base and edge. The male antenna is filiform.

This species can be recognized by its strongly streaked blackish gray wing with fused orbicular and reniform spots, long claviform spot, and a black-banded pale hindwing. The most similar species in most of our area, Sympistis major, has a more uniform gray forewing and a darker hindwing without a well-defined marginal band.  It also flies slightly earlier in the summer than S. poliochroa, most often ending by early August.  In southern Idaho, Sympistis utahensis flies with S. poliochroa and has a similarly-patterned forewing. S. utahensis is slightly smaller, lighter gray, and has contrasting black dashes in the base of its very long claviform spot and in the fused spots in the cell.  The dark gray in its terminal area is patchy and the dark banding on its hindwing is gray, rather than nearly black, as in S. poliochroa.

This species was known as Oncocnemis chandleri for many years.

This species is widely distributed in low to high elevation forests, but is most common at middle elevations in our area.  In the Pacific Northwest, habitats include rocky ridgetops at higher elevations, open ponderosa pine forests, and juniper woodlands.  It is usually uncommon and sporadic, but may be locally common.

Sympistis poliochroa is widely distributed east of the Cascade Mountains as far north as the vicinity of Williams Lake in south-central British Columbia. It is commonly collected along the east slope of the Cascades in Oregon and Washington, but it also occurs in southeastern British Columbia and southern Idaho.

The range of this species includes the southern half of Alberta, the Rocky Mountains from Alberta to Colorado, and California.

No information is presently available regarding larval foodplants of this species, but penstemons (Penstemon spp.) in the Scrophulariaceae are suspected based upon related species.