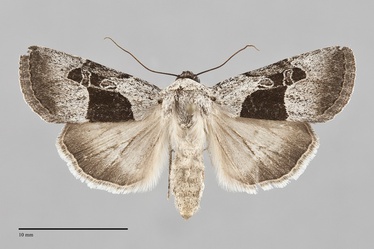 Sympistis umbrifascia is a distinctive, small (FW length 12 - 14 mm), light gray moth that occurs in dry forests throughout most of the Northwest and flies during the summer. It has a brown-black median area that envelops the light-rimmed orbicular and forewing spots and a black head and collar base. The ground color of the forewing is powdery light gray, darkening gradually to darker brown gray toward on the wing margin. Most of the median area is smooth velvety brown-black, usually slightly lighter dark gray on the costa. The basal line, subterminal line, and claviform spots are absent. The antemedial line is dark gray, abutting the median area and white outside of the median area, and is drawn lateral to the mid-orbicular spot in the cell and concave toward the base and oblique to the wing posterior to the spot. The postmedial line touches the top and bottom of the reniform spot with the segment lateral to the spot strongly convex toward the outer margin. The segment posterior to the spot is smoothly concave toward the wing base to meet the trailing margin at a right angle or slight angle toward the anal angle. The outlines of the orbicular and reniform spots are double, thin, black, and filled with white. Both spots are filled with dark gray similar to the median segment of the costa. The orbicular spot is oval, nearly touching the reniform spot. The reniform spot is an upright oval or weakly hourglass-shaped. The hindwing is light gray, darker in females, with ill-defined darker gray toward the margin, dark veins, and a thin dark terminal line. The fringe is white with a gray base. The head and base of the collar are black. The rest of the collar and posterior thorax are gray. The male antenna is filiform.

This species is easily identified by its gray forewing with the distinctively-shaped brown-black median area.

This species is widely distributed in relatively dry, open grassland habitats, oak savanna, juniper woodlands, and open ponderosa pine forests.  It is usually rare and sporadic, but may be locally common.

The range of this species includes most of California south of our area. It has also been found in Nevada, Utah, and Colorado.

This species is a foodplant specialist feeding on penstemons (Penstemon spp.) in the Scrophulariaceae.

This species flies during the summer in our area. It has been collected from late June to mid-September. It is nocturnal and comes to lights.