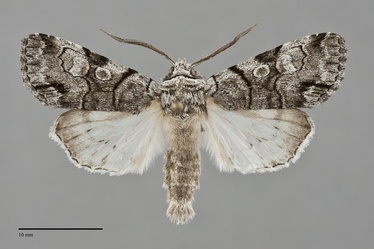 Sympistis chionanti is a medium-sized moth (FW length 18 - 20 mm) that has been reported to occur in British Columbia. It has a silver-gray forewing with black lines, one or two black anal dashes, pale-filled spots, white hindwings, and a wide male antenna. The forewing is silvery gray with a slight sheen. The basal wing and costa are lighter gray. A thick black dash is present between veins CuA1 and CuA2 and a similar length but thinner dash is usually present in the next interspace near CuA2. A small black line is present lateral to the basal line at the base of the cell. The lines are black. The basal line is curved. The antemedial line is thick, smoothly excurved. The median line is diffuse, wide and diffuse on the costa and faint elsewhere. The postmedial line is oblique from lateral to medial on the costa, bent sharply to run parallel to the costa beyond the reniform spot, gently scalloped around the end of the cell to the inferior reniform spot to which it is fused, curved below the posteromedial spot, and sinuous to the trailing margin. The subterminal line is light gray, slightly zigzag parallel to the outer margin and preceded by a black spot at the costa. The terminal line is a series of black lines between the veins. The fringe is gray with slight checkering. The outlines of the spots are thin and gray. The orbicular spot is moderately large, filled peripherally with pale gray and centrally with the ground color. The reniform spot is wide, moderately large, and kidney-shaped. It is filled with pale gray with a faint darker gray lunule on the medial side of center. The claviform spot is black, thin, apically acute with the tip at the median line, filled with the ground color. The hindwing is white with brown-gray veins near the anterior margin, gray-brown shading near the outer margin (strongest anteriorly), black lines on the veins along the postmedial line, and a dark gray terminal line. The hindwing fringe is white. The head is gray. The collar is slightly rosy gray at the base, has a black subbasal line, then gray to the edge which is dark gray. The rest of the thorax is gray. The male antenna is widely bipectinate with dense cilia on the branches.

This species is widely distributed in hardwood forests throughout eastern North America extending westward to the Rocky Mountains.

This species has been reported to occur in British Columbia (Powell and Opler 2009), although no specimens have been examined by us.

Sympistis chionanti is widespread in eastern and central North America where it occurs from New Brunswick and southern Ontario to Georgia, Kansas, and Colorado. It extends west to Montana and Alberta near our region.

This species is a foodplant specialist feeding on Triosteum in the Caprifoliaceae, and on Chionanthus and Fraxinus in the Oleaceae.

The flight period of S. chionanti is the fall. Forbes (1954) indicates that the moth flies in September and October in the east. It is nocturnal and comes to lights.