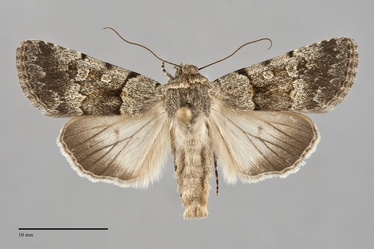 Sympistis cherti is one of our largest Sympistis species (FW length 16 -19 mm), a variably large, powdery gray and dark gray moth that occurs widely in dry forests near the east slope of the Cascades and flies in late summer and early fall. It has black lines and pale spots. The forewing is powdery gray with a slight yellow tint. The pale areas are suffused with dark, and the dark areas are suffused with pale. The lightest and most uniform area is basal to the antemedial line. The medial portion of the subterminal area is similar, the largest and lightest spot adjacent to the transverse portion of the postmedial line on the posterior half of the wing, and next lightest near the costa. The median area is darker charcoal gray, slightly lighter on the costa and variably suffused with gray, decreasing from anterior to posterior. The terminal area is a patchy mixture of the light and dark gray scales, varying from nearly as light as the wing base to as dark as the lateral subterminal area. The basal, antemedial, and postmedial lines are black, with slightly lighter yellow on the sides of the latter two lines opposite the median area. The basal line is short, sometimes reduced to a black spot on the costa. The antemedial line is thick and slightly irregular, thick on the costa and appearing thick in the fold due to the adjacent small black claviform spot. The postmedial line is thinner than the antemedial line below a spot on the costa, slightly scalloped, excurved from below the costa around the end of the cell to touch the lower reniform spot, then nearly straight below the spot to meet the trailing margin at a right angle. The median line is diffuse dark gray, usually only evident on the costa. The subterminal line is pale yellow, very irregular and usually faint. The terminal line is gray, followed by yellow. The fringe is gray. The orbicular and reniform spots are similar, dark gray with light gray or slightly luteous peripheral and darker gray central filling. The orbicular spot is oval and the reniform spot is kidney-shaped. The claviform spot is small, usually appearing as a thickening of the antemedial line. The hindwing is pale gray with ill-defined darker gray marginal band, veins, thin discal spot, and thin terminal line. The fringe is tri-colored, yellow, gray, and white. The head and collar are smooth dark brown-gray with a light edge on the collar. The rest of the thorax is gray. The male antenna is filiform.

Sympistis cherti is most similar to Sympistis columbia in most of its range. This species is smooth gray with very prominent black lines and black-rimmed spots, not powdery with dark gray shading like S. cherti. Sympistis cherti flies with Sympistis sobek in parts of southwestern and central Oregon. This species is greenish on the forewing due to a mixture of dark yellow and gray scales and has a sharply-defined hindwing marginal band, unlike S. cherti which lacks a green hue and has an ill-defined inner margin on the marginal band.

The range of S. cherti extends south to the northern Sierra Nevada in California.

No information is presently available regarding larval foodplants of this species, but it may feed on ocean spray (Holodiscus discolor) in the Rosaceae based upon closely related species.

This species flies during the summer and early fall. It first appears in early July and has been collected through September. It is nocturnal and comes to lights.