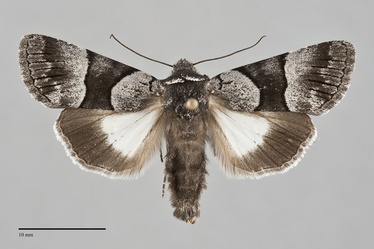 Sympistis chalybdis is a distinctive, medium-sized moth (FW length 16 - 17 mm) that flies in middle-elevation forests in late summer. It has a black median area on a powdery steel-gray forewing and a white hindwing with a black marginal band. The forewing ground color is powdery steel-gray, slightly darker on the posterior wing base and the distal wing, with dark gray in the lateral subterminal area and in the fold in the terminal area. The median area is charcoal gray anterior to the cubital vein and black posterior to the vein. A short black dash is present at the base of the cell, and a row of eight thin black lines extend from the mid subterminal area to the margin. The basal line is black and short, located near the wing base. The antemedial and postmedial lines are black and smoothly undulating. The antemedial line is evenly excurved, oblique to the costa, and perpendicular to the trailing margin. The postmedial line is slightly concave toward the base with a slight lateral convex segment on the mid-wing. The dark gray medial line is only evident near the costa. The irregular subterminal line is light gray, evident mostly as the demarcation of the dark subterminal area from the lighter terminal area. The terminal line is thin, black. The fringe is dark gray, weakly checkered on the posterior wing. The spots are absent. The hindwing ground color is pure white. The anterior margin and a broad sharply-demarcated marginal band area dark blackish gray. The hindwing fringe is white with a gray base. The head and collar are charcoal gray with a thin silver gray edge on the collar. The posterior thorax is blackish gray. The male antenna is filiform.

This species can be easily identified by the even black band across the steel gray forewing. The most similar species, Sympistis barnesii, has a gray median area instead of black and has a light gray hindwing with a less distinct marginal band.

The larva is smooth with a dorsal hump near the tail.  The color is brown with thin, faint white dorsal and lateral lines.  It is illustrated by Miller and Hammond (2003).

This species is rare and sporadic at middle to high elevations in the Cascades and northern Rocky Mountains.  The habitat in British Columbia and Washington is open middle elevation forest and ridges with Spirea. It occupies wet, boggy hardwood-conifer forests and open bogs in Oregon.  This species is considered to be management sensitive, and benefits from thinning and burning that maintains open bog habitats against heavy tree invasion.

Sympistis chalybdis is widely distributed in forests of the Pacific Northwest but is only known from a few localities in each Province or State. It has been collected across southern British Columbia, in the Cascade Range of Oregon and Washington, and in the Blue Mountains in southeastern Washington.

This species is found in western Alberta outside of the Pacific Northwest. The range is reported to extend east to Manitoba in Powell and Opler (2009), but the eastern taxon Sympistis piffardi extends through the Prairie Provinces to eastern Alberta. The relationship of these two taxa warrants further examination where the ranges approach in Alberta

This species is only known to feed on Douglas spiraea (Spiraea douglasii) in the Rosaceae, although it may feed on other hardwood shrubs in bogs such as huckleberries (Vaccinium spp.) in the Ericaceae. The shrubs Spiraea densiflora and Spiraea stevenii are common in the locales where S. chalybdis occurs (Troubridge and Crabo 1998).

This species flies in late summer and fall, usually from mid-August to early September. It is nocturnal and comes to lights.