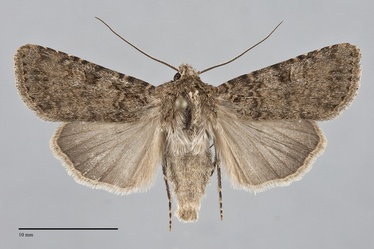 Euxoa altens is a nondescript, moderately-sized, powdery gray-brown Euxoa (FW length 13–17 mm) that flies at middle to high elevations as far north as southern British Columbia during the summer. The forewing color is nearly even, minimally darker and grayer on the distal wing, especially near the subterminal line. The cell between the spots is darker in some specimens. The basal, antemedial, and postmedial lines are usually fairly faint, gray, double with components of unequal strength, and filled with the ground color. The basal and antemedial lines are similar, slightly irregular, and oriented perpendicular to the wing. The median line is gray, faint. The postmedial line has a toothed inner component and weak or absent smoother outer line, is strongly drawn toward the base on the costa, is bent sharply near the costa, strongly oblique toward the base below the bend with a slightly concave segment below the reniform spot. The subterminal line is pale luteous, powdery and weak, sometimes broken into diffuse spots. The terminal line is dark gray and either thin or a series of spots. The fringe is concolorous with the terminal area. The orbicular and reniform spots are partially outlined by outer thin dark gray and inner powdery luteous lines. The orbicular spot is small, oval, variable from a faint pale spot without an outline to completely rimmed in black and yellow with filling of the ground color. The reniform spot is small to moderate-sized, kidney-shaped, and usually similar to the orbicular spot or with slightly greater yellow lining. The claviform spot is small and faint or absent. The hindwing is brownish-gray, slightly darker toward the outer margin, with faintly darker discal spot and veins. The hindwing fringe is light gray with a darker base. The head and thorax are brownish gray, usually with a relatively faint thin gray line across the distal collar. The male antenna is strongly biserrate with long fasciculations. A flat-topped frontal tubercle is present. Euxoa altens is placed in the subgenus Pleonectopoda. This subgenus has a unique twist near the base of the male vesica.

This species is rather nondescript, even for a Euxoa. It can usually be recognized by its high-elevation habitat, summer flight period, powdery gray-brown color, and relatively faint lines and spots. It is easily confused with several other brownish Euxoa species with which it occurs, including Euxoa terrenus, Euxoa comosa, Euxoa satis, and Euxoa extrenea. All of these species have thicker and darker gray to black markings. Euxoa scotogrammoides, another plainly marked species that usually flies earlier in the year at lower elevations but occasionally appears at higher altitudes, is similar to E. altens. It has even less conspicuous lines and spots that usually lack black and light yellow components. It also has a greater contrast between the dark shade in the distal subterminal area and the terminal area than in E. altens. Structurally, the saccular extensions of E. altens are shorter than those of these similar moths.

As the name implies (altens means "high"), this moth is found at higher elevations in the mountains. In the Pacific Northwest, it is relatively common in spruce-fir forests along the summit of the Cascades.  However, it is less common in ponderosa pine forests at middle elevations along the east slope of the Cascades or in the Rocky Mountain region.

Euxoa altens is found in the mountains from southern British Columbia to central Idaho and in the Cascade Mountains to southern Oregon. It has also been found on isolated peaks in the Basin and Range province.

No information is presently available regarding larval foodplants of this species, but it is probably a soil-surface feeding cutworm that feeds on general herbaceous vegetation like related species.

This species flies during the summer, with most Pacific Northwest records from late June to early August. It is nocturnal and comes to lights.