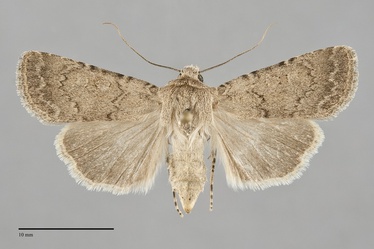 Euxoa bifasciata is a very rare, medium-sized, pale gray moth (FW length 14–16 mm) with forewing markings limited to the black transverse lines. The forewing is relatively short and broad. It is nearly uniform tan-gray in color, slightly grayer in the terminal area, with a few scattered dark scales. The basal, antemedial, and postmedial lines are black. The inconspicuous basal line is short, positioned near the forewing base. The antemedial and postmedial lines are similar, toothed on the veins. The antemedial line is nearly perpendicular to the posterior margin. The median line is a dark mark on the costa. The postmedial line is bluntly curved around the reniform spot and oblique toward the base with a slightly concave segment below the spot. The subterminal line is pale gray or absent, slightly irregular. The terminal line is very faint. The fringe is gray with a thin ochre base. The orbicular and reniform spot are partially faintly outlined by thin gray line and are filled with light gray. The claviform spot is absent. The hindwing is tan-gray, slightly darker toward the margin, with dark veins. The hindwing fringe is white with an ochre and gray base. The head and thorax are tan-gray without dark markings. A frontal tubercle is present. The male antenna is biserrate. Euxoa bifasciata is a member of the subgenus Euxoa.

This species can be recognized by the uniform gray color of the forewing, reduced markings consisting of the black antemedial and postmedial lines, and the absence of a black line on the collar. The uniform gray collar distinguishes this moth from similar forms of Euxoa infausta, a much more common variable species, and Euxoa permixta, an uncommon species. The forewing spots of both of these moths are usually outlines in black unlike the very faint spots of E. bifasciata. Structurally, E. bifasciata has a distinctive S-shaped harpe in males and a small appendix bursae in females (Lafontaine 1987).

This species is widely distributed in dry coniferous forest habitats but is very rare.  It is very poorly known in the Pacific Northwest. A specimen from eastern California was found in forested dunes.

Euxoa bifasciata has been collected in the Siskiyou mountains of southwestern Oregon. Lafontaine (1987) describes the range as extending from western Montana to north-central Washington.

The range extends to Colorado, central Arizona, and southern California to the south of our region.

No information is presently available regarding larval foodplants of this species, but it is probably a soil surface-feeding cutworm that feeds on herbaceous plants based upon related species.