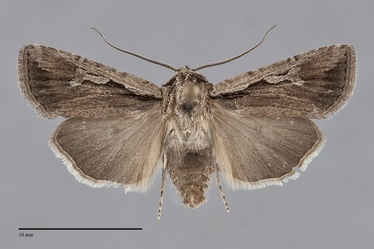 Euxoa subandera is a rarely collected, small, brown Euxoa (FW length 12–15 mm) flies in dry habitats during the summer. Its forewing has fused orbicular and reniform spots and a pale costa. The forewing is gray-brown, slightly lighter gray along the posterior margin, at the apex, and in the distal subterminal area of some specimens. The costa is lighter gray or tan-gray, lightest near the base. The terminal area is dark gray. The cell and a thick basal dash are black. The veins are dark on the distal wing. The antemedial and postmedial lines are paired gray spots on the costa, absent elsewhere. The subterminal line is only evident as the uneven transition between the lighter subterminal and darker terminal areas, with a blunt pale W-mark along veins M3 and CuA1. The terminal line is dark. The fringe is gray. The orbicular and reniform spots are outlined in black and filled with light gray peripherally and the ground color centrally. The orbicular spot is very long, broadly fused to the kidney-shaped or D-shaped reniform spot. The claviform spot is black, weak. The hindwing is gray-brown in both sexes, with slightly darker discal spot, veins, and terminal line. The hindwing fringe is white with striped ochre and gray base. The head and thorax are gray-brown. The collar is finely striped gray, with a thick black transverse line. A frontal tubercle is present. The male antenna is weakly bipectinate. Euxoa subandera is a member of the large subgenus Euxoa.

This species can be recognized by its late summer flight period, small size, brown color with pale costa, and fused forewing spots. It is most similar to Euxoa hollemani, with which it was confused for many years (Lafontaine 1987). Males of E. hollemani are easily distinguished by a lighter hindwing. This species flies later in the fall, but there is some overlap between them. Females of E. subandera are darker than E. hollemani. The forewing spots of E. subandera are usually more broadly fused than those of E. hollemani, and its orbicular spot is more likely to have a thin pale lining and dark filling rather than being entirely light as in most specimens of E. hollemani.

This species is widely distributed in dry forest habitats throughout much of western North America, but is usually very rare.  In the Pacific Northwest, it is rare and sporadic in dry, open ponderosa pine forests and juniper woodlands at middle elevations, although it also occurs in open sagebrush steppe.

Euxoa subandera is found in the dry interior regions of eastern Washington, eastern Oregon, and southern Idaho. A single record is shown for southern British Columbia on the Moth Photographers Group website.

The range of this species extends south through California, with additional records from Nevada, western Utah, and Arizona (Lafontaine 1987).

This species flies slightly earlier in the year than E. hollemani, beginning in late July and lasting to early September in our area. It is nocturnal and comes to lights.