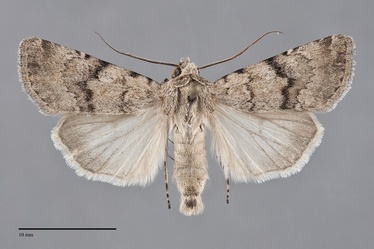 Euxoa annulipes is a small to medium-size,d whitish tan-gray Euxoa (FW length 13–16 mm) with a prominent black median line that flies in rocky deserts during early summer. The forewing color is "dirty" light gray-tan, appearing whitish-gray, with a sprinkling of dark scales. Gray suffusion is often present in the distal subterminal and terminal areas, and sometimes along the posterior margin. A few specimens have a light red flush on the forewing. The lines are dark gray, single or partially double with strong and weak components and rarely absent except for spots on the costa, filled with a slightly lighter shade of the ground color. The basal and antemedial lines are slightly irregular, oriented nearly perpendicular to the forewing. The median line is dark gray to black, thick and diffuse, bent with apex near the lower reniform spot with a characteristic laterally convex segment below the spot that is most prominent along the medial border. The postmedial line is usually a single finely toothed gray line, smoothly curved around the reniform spot and angled slightly toward the base below the spot. The subterminal line is pale and diffuse or absent, usually preceded by a dark spot on the costa and occasionally across the forewing; the distal shade is more often continuous from the subterminal area to the outer margin without a pale line running through it. The terminal line is a series of black spots. The fringe is pale gray-tan. The orbicular spot is oval, usually lacking a dark border but evident as slightly lighter filling. The reniform spot is usually vague, often with a dark medial outline but obscure elsewhere, filled with similar pale filling as the orbicular spot. No claviform spot is present. The hindwing is slight tan off-white with a light gray marginal band on the outer fourth in males and the outer third to half in females, with slightly darker veins, discal spot, and terminal line. The fringe is white with a tan base. The head and thorax are similar to the forewing ground color without dark markings. The frons bears a flat-topped tubercle. The male antenna is bipectinate. Euxoa annulipes is a member of the large subgenus Euxoa.

This species can be identified easily over most of its range by the pale dirty gray-tan color with the markings dominated by the dark median line with a notch along the medial border below the reniform spot. It is most similar to Euxoa emma, found only in north-central Washington, which is lighter and smoother cream colored with darker and less diffuse lines. These species differ in the shapes of the male valves. They can be reliably separated by location since the range of E. annulipes only extends as far north as Baker County, Oregon.

This species is endemic to very dry sagebrush steppe at low elevations in the Great Basin region east of the Cascades, where it is associated with rocky habitats such as canyons and basalt cliffs.  It is usually sporadic and rare in the Pacific Northwest, but can be moderately common in the appropriate habitat.  A population occurs on barren, rocky serpentine ridgetops at high elevations in the Siskiyou Mountains of southwestern Oregon where it is locally common.

Euxoa annulipes has been found in south-eastern Oregon and western Idaho in our region. An apparently disjunct population occurs on ridges in the Siskiyou Mountains of southwestern Oregon.

The range of this species extends from western Colorado to southwestern California south of our region. Most California populations have been found in the eastern part of the state.

This species flies relatively early in the year for a Euxoa, usually in early summer. Records from our region are from mid-June to early August, the later records from higher elevations. It is nocturnal and comes to lights.