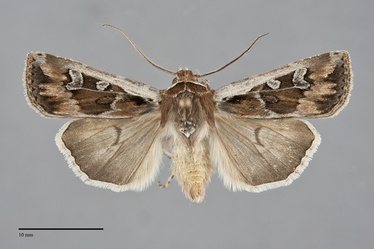 Euxoa wilsoni is a colorful red-brown, orange-brown, or ochre, medium-sized Euxoa (FW length 16–18 mm) that occurs exclusively on sand beaches along the Pacific Coast. It has a pale cream costa and lining of the spots. The forewing is relatively long and narrow with a squared-off outer margin. The ground color of the forewing is fawn tan from the base to the postmedial line, including the cell but not the costal or posterior margins. The posterior margin and subterminal area are lighter gray-ochre or light gray, with red or orange flush in the latter area. A thick black basal dash is present. The costa is contrasting dull cream, interrupted by gray in the subterminal area. Similar light color extends to the reniform spot on the cubital vein, and is present on distal M3 and CuA1 in some specimens. The terminal area is dark gray. An uncommon form is light orange-tan without or with darker gray in the cell and terminal area. Females are slightly grayer than the males. The basal, median, and subterminal lines are absent. The antemedial line is light gray and black, slightly irregular, angled toward the outer margin from the cell to the posterior margin. The postmedial line is a thin evenly scalloped black line followed by light gray, absent from the costa, evident near the lateral reniform spot and touching the lower end of the spot, then slightly concave and angled 45° toward the base, fading near the margin. The position of the subterminal line is evident as the transition from the light subterminal area to the gray terminal area, very irregular with a long and narrow "W" mark to the outer margin on M3 and CuA1. A series of black spots forms the terminal line. The fringe is cream, to gray, weakly checkered at the base in some specimens. The orbicular and reniform spots are outlined in black, lined with cream, and filled centrally with dark gray. The orbicular spot is oval, often irregularly shaped, small to moderate-sized. The reniform spot is boomerang-shaped, moderately large. The claviform spot is black, small to moderate-sized. The hindwing is light yellowish gray, with increasingly dark gray toward the outer margin, with dark veins at the base, dark discal spot, and terminal line. The hindwing fringe is white. The head and thorax are fawn, with a cream base of the collar separated from the darker edge by a black transverse line. No frontal tubercle is present. The male antenna is strongly biserrate but appears wide due to long fasciculae. Euxoa wilsoni is placed in the subgenus Orosagrotis in which the male vesica projects toward the left from the tip of the aedeagus and the female ductus seminalis joins the right side of the corpus bursae, the opposite of their positions in other subgenera.

This species can be identified by its Pacific beach habitat, fawn or orange-tan color, light costa, boomerang-shaped reniform spot, and long "W" mark at the outer margin. It is only likely to be confused with Euxoa perexcellens, a stockier moth with which it flies. Euxoa perexcellens has a pale yellow subterminal line, while E. wilsoni lacks a pale line at the transition between the subterminal and terminal areas. Structurally, the frons of E. wilsoni is smooth while that of E. perexcellens has a raised tubercle typical of most Euxoa species.

This species is narrowly restricted to sand beaches along the Pacific Ocean, including dunes.  Such habitats usually consist of beach grass together with mixed coastal herbaceous vegetation.  It is moderately common in this very restricted habitat.

Euxoa wilsoni has been found on the immediate Pacific Coast from the Queen Charlotte Islands (Haida Gwaii) to southern Oregon.

The range extends south on the coast of California to San Luis Obispo County. It is replaced further south by the similar species Euxoa riversii (Dyar).

This species is a sand-surface feeding cutworm that feeds on general herbaceous vegetation. It is best known for feeding on beach lupines (Lupinus littoralis) in the Fabaceae.

Euxoa wilsoni has a fairly long flight season during the summer. It has been collected from late June to mid-September in the Pacific Northwest.