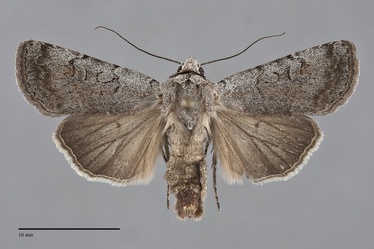 Euxoa bicollaris is a distinctive, small to medium-sized Euxoa (FW length 13–17 mm) that flies east of the Cascade Range during the summer. It has steely blue-gray forewings with dark red-brown near the outer margin, an oval orbicular spot, and a thick black line across the collar. The forewing is finely powdery gray, lighter gray near the costa and dark gray to reddish gray-brown toward the outer and trailing margins. The basal and antemedial lines are gray, double with components of unequal strength, filled with a slightly lighter gray than the ground color, strong on the costa and absent or faint elsewhere. When visible the antemedial line is slightly irregular and angled slightly outward. The median line is absent. The postmedial line is similar to the other lines at the costa but is simple elsewhere, finely scalloped, close to the reniform spot and then angled 45° basad below the spot. The subterminal line is pale tan or yellowish, thin, irregular, preceded by a dark gray spot on the costa and a dark red-brown shade across the rest of the wing. The fringe is concolorous with the terminal area without a strong terminal line. The orbicular and reniform spots are partially outlined in thin dark gray and are filled with the ground color or a slightly paler shade peripherally and the ground color centrally. The orbicular spot is moderately large, oval, often open toward the costa or both anteriorly and posteriorly. The reniform spot is outlined on the medial side and is indistinct elsewhere. No claviform spot is present. The hindwing is brown-gray with a darker gray margin, dark veins, discal spot, and terminal line. The hindwing fringe is white with a gray base. The head and thorax are gray with a thick black bar across the basal third of the collar. A frontal tubercle is present. The male antenna is biserrate. Euxoa bicollaris is place in the subgenus Euxoa and is a member of the Euxoa infausta species-group.

Euxoa bicollaris can be identified by the combination of a blue-gray forewing with lighter costa, dark red-brown on the distal wing, and thick black line across the collar. Its oval orbicular spot is typical of its species-group and is another useful marking. Euxoa bicollaris is unlikely to be confused with other species in our area. The powdery silver-gray form of Euxoa silens is the only species with a similar color, but it lacks the red-brown color and thick black collar of E. bicollaris.

This species is widely distributed in dry forest, woodland, and rangeland habitats throughout much of western North America.  In the Pacific Northwest, it is widely distributed in various dry habitats and varies in abundance from uncommon to common.  It occurs in oak savanna and dry grasslands at low elevations in southwestern Oregon, dry meadows at high elevations along the summit of the Cascades, in open ponderosa pine forests and juniper woodlands at middle elevations, and in open sagebrush steppe.

Euxoa bicollaris is found throughout the Pacific Northwest as far north as northern Washington and as far east as western Montana. In Washington it is most commonly found in the foothills near the northwest corner of the Columbia Basin along the Methow and Okanogan Rivers. In eastern Oregon it is most commonly collected in the Blue Mountains. It does not occur west of the Cascade Mountains except in southwestern Oregon.

The distribution extends to the south as far as southern California, extending east through California and western Nevada.

Adults fly during the summer and have been collected from mid-June through July in our region. They are nocturnal and come to lights.