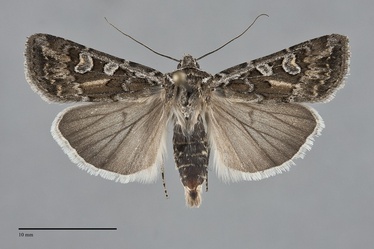 Euxoa perolivalis is a small to medium-sized Euxoa (FW length 13–16 mm) that flies in the eastern part of the Pacific Northwest during the summer. It has mottled dark olive-gray and gray forewings with a dull ochre line through the fold, a streaked pale gray costa, and pale gray filling of the lines and spots. Most of the median area is olive-gray, darker gray in the cell and light ochre in the fold. The subterminal area is mottled gray and dark gray, the apex is gray, and the terminal area is uniform dark gray. The costa is gray, similar to the subterminal area and apex, but streakier. Some specimens have a very thin gray cubital vein. The basal and antemedial lines are black and gray, incomplete with the basal line evident on the anterior forewing and the antemedial line below the cubital vein. The latter is angled strongly toward the outer margin and bulges outward between the veins. The median line is absent. The postmedial line has a dark lightly scalloped inner line and fainter outer components, is pulled strongly basad on the costa, with a short straight segment lateral to the reniform spot, and then bent 45° toward the base at the level of the lower cell. The subterminal line is yellow-tan or light gray, undulating with a slightly excurved segment on the mid-forewing. It is preceded by dark gray patch on the costa and a gray shade or series of indistinct spots or wedges across the posterior and mid-forewing. The terminal line is dark gray, thin, and sometimes broken into spots. The fringe is gray, similar to the terminal area. The spots are outlined in dark gray, lined with very pale gray, and filled with medium-gray. The orbicular post is a tilted oval, relatively small, and the reniform spot is kidney-shaped. The claviform spot is black, moderate-size. The hindwing is gray with an ill-defined darker margin, discal spot, veins and terminal line. The white fringe is white with a light gray base. The head and thorax are olive gray with light and dark edges on the tegulae. The base of the collar is light gray, separated from the dull brown or olive gray edge by a black line. A frontal tubercle is present. The male antenna is bead-like. Euxoa perolivalis is a member of the subgenus Orosagrotis.

Euxoa perolivalis is the grayest of the non-alpine species in the subgenus Orosagrotis. It can be recognized by the combination of its eastern distribution in our area, the summer flight, olive-gray color, ochre fold, gray costa, mottling on the distal forewing, and filling of the nearly white-rimmed spots. It is similar to several other species in the same subgenus: Euxoa ridingsiana, Euxoa maimes, Euxoa flavicollis, and Euxoa manitobana. It is most similar to Euxoa manitobana. This species is variable in color, and brown specimens are easily distinguished by this factor alone. Grayer specimens have a less distinct light streak through the fold, which is more diffuse and less yellow than that of E. perolivalis. Males of E. perolivalis can also be recognized by their narrow, bead-like antennae, at least biserrate in the other species. Euxoa perolivalis also resembles several streaky species in the subgenus Euxoa that fly in sage steppe habitats in the fall, including Euxoa dargo, Euxoa cicatricosa, and Euxoa cinereopallida. All of these species have longitudinal pale streaking due to pale scales along the veins which E. perolivalis lacks. The flight season of E. perolivalis is summer, usually much earlier during the year than the others.

This species is found in quaking aspen or dry pine forests of the Rocky Mountain region, and barely enters the Pacific Northwest.  It has recently been collected in dry juniper woodlands at low elevations in central Oregon.

Adults of E. perolivalis fly during the summer and have been found in July and early August in the Pacific Northwest and Alberta. It is nocturnal and comes to lights.