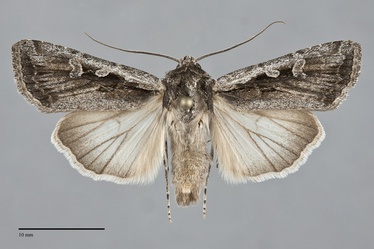 Euxoa silens is a medium-sized, dimorphic Euxoa (FW length 15–19 mm) in which one form has silver-gray forewings with black in the cell and a pale costa and the other is powdery gray with dark on the distal forewing. It flies in steppe and dry forests during early summer. This is a relatively stout Euxoa with a pointed forewing. The ground color of the first form is powdery silver, sometimes with a slight yellow cast. Powdery gray to gray-brown suffusion is present around the cell, extending along the veins in the posterior median and subterminal areas. The cell is dark gray to black. The terminal area, except the apex is gray. The costa is light gray, whitish at the base and at the apex, but interrupted by a gray spot in the distal subterminal area. A thin black basal dash is present and the veins are dark on the distal wing. The lines are only partially evident: double gray spots on the costa, a short segment of the antemedial line near the base of the claviform spot, and a weakly scalloped gray postmedial line near the reniform spot or across the wing in a few specimens. No trace of the median line is present. The subterminal line is pale gray but variable, often partially or completely absent. It is preceded by ill-defined gray spots or weak wedges between the veins on the mid-forewing. The terminal line is black, thin or broken into spots. The fringe is gray. The orbicular and reniform spots are partially outlined in black and are filled with light gray peripherally. The orbicular spot is oval, often open toward the costa, with a faintly darker ocellus. The reniform spot is kidney-shaped, usually incomplete laterally, with more extensive gray central filling. The claviform spot is black, small, moderate-sized, or absent. The powdery gray form is nearly evenly colored except for dark gray on the costa in the distal subterminal and terminal areas. The lines are faint except for spots on the costa, the wedges in the distal terminal area are present, and the black outlines of the spots persist. The hindwing is pale gray with a yellow cast, slightly darker in females, with darker gray near the margin, gray veins, thin discal spot, and thin terminal line. The hindwing fringe is white with a patchy gray base. The head and thorax are powdery silver gray; with a black transverse line across the mid-collar; the tip of the collar and the most of the tegulae are gray-brown in the form with a light costa. A frontal tubercle is present. The male antenna is biserrate. Euxoa silens species belongs to the subgenus Euxoa.

Both forms of this moth are relatively distinctive and can be recognized by their moderately large size, early summer flight, and silver-gray color. The form with the light costa is most easily identified, but the powdery even-colored form is also distinctive. Euxoa bicollaris has a similar blue-gray forewing, but can be identified by red-brown shading on its distal forewing and a thick bar-like black mark across its collar. Euxoa silens could potentially be confused with Euxoa tristicula. The color of E. silens is powdery silver-gray, while that of E. tristicula is smoother cream.  Euxoa xasta, a rarely collected pale moth that flies in southern Idaho, resembles the silver form of E. silens.  It has dark veins on the distal forewing, a long orbicular spot that is drawn toward the base, and a more irregular transition between the pale subterminal and dark terminal areas than in E. silens.

Euxoa silens is found in dry habitats from the Fraser Canyon in south-central British Columbia through eastern Washington and Oregon. It is also found in southwestern Montana and in eastern and southern Idaho.

This species is widely distributed west of the Rocky Mountains where it occurs south to western Colorado, northern Arizona, and southern California. It also occurs in southern Alberta

Adults are on the wing fairly early during the year, with records as early as the beginning of May. It flies to mid-July in the Northwest. It is a nocturnal species and is attracted to lights.