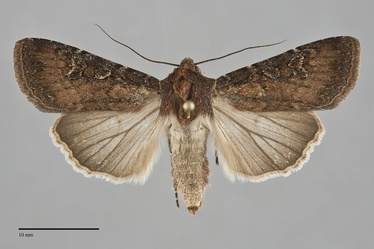 Euxoa ustulata is a rarely collected, moderate to large Euxoa (FW length 16–20 mm) that flies in the eastern part of the Pacific Northwest during mid- to late summer. Its forewing has inconspicuous gray-rimmed spots and dark lines. The forewing is an odd color, between dark orange-brown and red-brown, darker gray-brown along the costa and near the outer margin. A few light and dark scales are sprinkled on the base, and the veins are dark gray on the distal wing. The basal, antemedial, and postmedial lines are gray, double filled with a light shade of the ground color, complete but not prominent. The antemedial line is slightly irregular to zigzagged between the veins, angled slightly toward the outer margin. The median line is gray, very faint. The inner component of the postmedial line is strongly toothed on the veins, crossing the faint smooth outer component. This line is sharply pulled toward the base on the costa, is bent basad below the costa run near the outer part of the reniform spot, and then bent more strongly toward the base at the lower end of the spot. The subterminal line is pale gray, usually thin and very faint, reduced to a few scales in some specimens. It is preceded by an even shade of the darker gray of the terminal area. The basal line is thin, dark. The fringe is slightly lighter than the ground color. The orbicular and reniform spots are outlined by outer dark gray and inner powdery light gray and are filled centrally with the ground color. The orbicular spot is ovoid. The reniform spot is kidney-shaped. The claviform spot is absent or marked by a few pale scales. The hindwing is light gray, darker in females, with an indistinct darker gray shade on the distal third in males and the distal half in females. The veins, discal spot, and terminal line are darker gray. The fringe is two-toned gray. The head and thorax are dark reddish brown without dark markings. The male antenna is weakly bipectinate. A flat-topped frontal tubercle is present. Euxoa ustulata is place in the large subgenus Euxoa.

This moth can usually be identified by its relatively large size and odd brownish red-orange brown color. It is most likely to be confused with the darker species in the subgenus Palaeoeuxoa, particularly Euxoa shasta. These moths are redder in color, have less conspicuous transverse lines, and more prominent light filling of the reniform spot. Both sexes of Euxoa mimallonis and Euxoa intermontana have much lighter hindwings than E. usutulata. Euxoa nostra is orange-brown and is a fairly large Euxoa. It is lighter orange and has silvery gray on the costa and in the spots that E. ustulata lacks.

Euxoa ustulata can usually be identified by its rich red-brown, almost coppery, forewing color and gray hindwings and large size. It is most likely to be confused with Euxoa nostra, but this species is lighter orange-brown. The forewing color is similar to that of Euxoa intermontana with which it flies, but the hindwing of E. ustulata is much darker than that of this species.

This species has been collected at middle elevations in the Northwest, usually on sage-covered high ridges.  It has been collected in sclerophyllous shrub ridge habitat in the northern Sierra Nevada in California. Euxoa ustulata is very rarely collected and is poorly known.

Euxoa ustulata has only been collected three times in the Pacific Northwest. Two of the records are from the Blue Mountains, one in Asotin County, Washington and the other in Baker County, Oregon. The third occurrence is from south-central Idaho near the Nevada border.

Adults have been found in mid-July to late August in the Pacific Northwest. It is a nocturnal species and is attracted to lights.