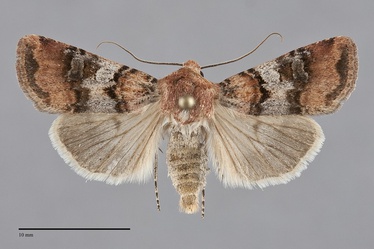 Euxoa murdocki is an attractive, small Euxoa (FW length 11–14 mm) that flies east of the Cascades during the fall. It has banded orange-brown, black, and light gray forewings. The forewing is bright orange-brown in the antemedial area, subterminal area, and at the apex. The basal area and median area proximal to the median lines are light gray, and the distal median area and terminal area are dark gray. The basal, antemedial, and postmedial lines are double, gray except thick black abutting the median area. The antemedial line is smoothly arched across the forewing. The dark gray median line is straight across the forewing. The postmedial line is smooth, is fused to the lateral reniform spot and perpendicular to the posterior margin below the medial spot. The subterminal line is pale tan, sinuous. The orbicular spot is light gray, lacking an outline except for a few black scales at its lateral end. The reniform is partially outlined in black and filled with similar gray to the surrounding median area. The claviform spot is black, fused to the antemedial line as a focal bump. The hindwing is light gray-tan with gray broad ill-defined gray marginal band, discal spot, and veins. The hindwing fringe is white with a tan base. The head and thorax are orange brown with gray at the base of the collar. The male antenna is weakly biserrate. Euxoa murdocki is a member of the subgenus Euxoa, the subgenus with the largest number of species.

This species is unmistakable among Euxoa. It could conceivably be mistaken for a Schinia such as S. walshinghami due to its small size and colorful pattern, but the pattern is quite different. Euxoa species lack the prominent ventral discal spots that is typical of Schinia.

The type locality of Agrotis murdocki Smith is British Columbia.

This species is widely distributed in dry forest and woodlands.  In the Pacific Northwest, it is uncommon to rare in dry open ponderosa pine forests, but is moderately common in juniper woodlands at middle elevations east of the Cascades.  It is also uncommon to rare on dry sagebrush steppe at low elevations east of the Cascades, but may be locally common on moist sagebrush steppe adjacent to wetlands such as marshes.  This species is considered to be management sensitive, and benefits from thinning and burning that maintains an open pine or juniper community.

Euxoa murdocki is found from southern British Columbia through the eastern portions of Washington and Oregon. It is likely to occur in Idaho given its overall distribution in North America.

Adults are single brooded and fly in the fall. Most of the records from our region are from late August through September.