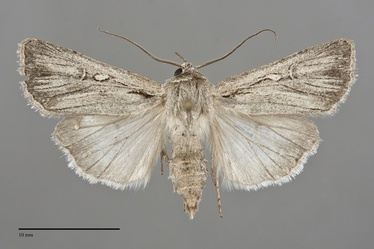 Euxoa absona is a small to medium-sized Euxoa (FW length 14–16 mm) that flies in southeastern Idaho during the summer. It has a pale-streaked forewing with a narrow, black-outlined orbicular spot that tapers toward the forewing base. The forewing has a slightly pointed apex. It is light grayish-tan to light brown, lightest along the costa and in the subterminal area.  Darker gray is present at the base and in the terminal area. The veins are thin and black on the outer third of the forewing.  A black basal dash is present. Most of the lines are are absent, although the position of the subterminal line is evident as a jagged transition between the pale subterminal area and gray terminal area, with pale teeth that extend nearly to the outer margin on veins M3 and CuA1.  The terminal line is black, thin or broken into spots. The fringe is light gray. The orbicular and reniform spots are partially outlined in black and filled with light gray. The orbicular spot is oval, drawn toward the base and often open at the medial end. The reniform spot is C-shaped, often open laterally. The claviform spot is black or absent. The hindwing is nearly white with darker gray near the outer margin and dark veins. The hindwing fringe is white with a gray base. The head and thorax are powdery tan-gray with a black transverse line across the mid-collar. A frontal tubercle is present. The male antenna is biserrate. Euxoa xasta species belongs to the subgenus Euxoa.

This species can be recognized by its southern desert habitat, pale wings, and narrow elongated orbicular spot that it open toward the base.  It is similar to Euxoa absona, another rare moth with which it flies in southern Idaho, but has much paler hindwings and lacks the thick black outlines of the forewing spots that are present in that species.  The silver-gray morph of Euxoa silens is also similar to E. xasta.  It tends to be slightly darker gray, has a less streaked outer forewing that lacks dark veins, and an oval orbicular spot without extension toward the forewing base.

This moth is associated with desert habitats (Lafontaine 1987).  It has been collected in bunchgrass steppe with open juniper forest and rock outcrops in Idaho.

Euxoa xasta has been collected once in extreme southern Idaho in the Middle Basin and Range ecoregion.

This moth has a fairly limited range in the Great Basin and western Texas.  It is known from all Four Corners states, Nevada, and Texas outside of our region.  Euxoa xasta is uncommonly collected across its range.

The early stages of this moth are unknown, but it is probably a soil-surface feeding cutworm that feeds on herbaceous vegetation based upon related species.

Adults have a long flight season and have been collected from May to September across their entire range (Lafontaine 1987).  The single Idaho record is from late July.  This species is nocturnal and come to light.