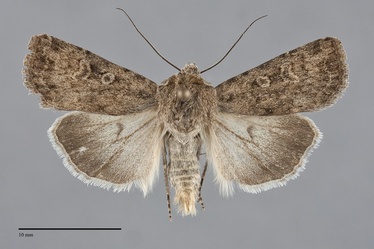 Euxoa taura is an uncommonly collected, small to medium-sized Euxoa (FW length 14–18 mm) that flies in British Columbia during the summer. It has light gray-tan forewings with a round orbicular spot filled with light gray and a dark ocellus, and a light tan hindwing with a gray marginal band. The forewing is mottled light grayish-tan, often suffused with gray-brown to produce a "dirty" appearance. The outer margin is mottled with gray. The cell, especially the anterior portion between the spots, is darker gray. The fold and costa are sometimes lighter than the ground in a form with a darker gray median area. The transverse lines are powdery gray, focally double. The basal line is indistinct. The antemedial line is angled slightly toward the outer margin and toothed toward the base on the veins. The median line is gray, diffuse, and faint. The postmedial line is light gray, varying from sharply-defined to indistinct, toothed on the veins, pulled basad and the costa, nearly perpendicular to the forewing lateral to the reniform spot, and bent 45° toward the base at the level of the lower cell. The subterminal line is light tan and undulating. It is preceded by a gray spot on the costa and a powdery shade with indistinct gray wedges from the lower cell to the posterior margin. The orbicular and reniform spots are partially outlined in black, lined with light tan-gray, and filled with powdery darker gray. The orbicular spot is round or oval, often open toward the costa. The reniform spot is kidney-shaped, often indistinct at the lower end. The claviform is black, moderate-size, often incomplete inferiorly. The hindwing is pale tan-gray with a smoky brown-gray moderately well-defined marginal band, thin discal spot, veins, and terminal line. The hindwing fringe is white with a striped ochre and gray base. The head and most of the thorax match the ground color of the forewing, powdery gray-tan. A frontal tubercle is present. The male antenna is weakly biserrate. Euxoa taura is a member of the subgenus Orosagrotis.

This species can be identified by its summer flight period, pale grayish tan color with powdery dark markings, and round or oval orbicular spot outlined by black, filled with gray, and containing an ocellus. It resembles closely Euxoa latro, another uncommon moth that flies at high elevations in the Cascade Mountains later in the season during the fall. Other than the differences in flight period, E. latro is grayer than E. taura, has less distinct markings in most specimens, has a darker gray hindwing, and a more strongly biserrate male antenna.

Collectors in northern British Columbia should be aware of the similar species Euxoa macrodentata, currently only known from Yukon Territory. It is closely related to E. taura and resembles it, differing chiefly in smaller size (FW length 13–14 mm) and in having a filiform male antenna.

This species is narrowly endemic to the short-grass prairies of the Great Plains. It has been collected on a high-elevation ridge in mixed Douglas Fir and Fir  (Pseudotsuga menziesii/Abies spp.) forest in British Columbia.

Euxoa taura has only been collected along the eastern edge of the Coast Range in British Columbia. It is likely to be more widespread in British Columbia, especially near the Alberta border. It has also been found at one locality in east-central Idaho and in western Montana.

This is a species that is found predominantly on the western Great Plains. It is found from southern Alberta south to western Colorado and east to Nebraska.

The flight period of E. taura is the summer, with records from mid-July to September across the entire range of the species. It is nocturnal and comes to lights.