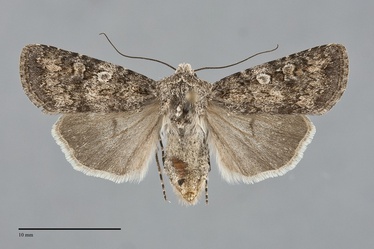 Euxoa latro is a rarely collected, small Euxoa (FW length 12–15 mm) that flies at middle to high elevations in the Cascade Mountains during the fall. It has mottled gray-brown forewings with a round pale-filled orbicular spot. The forewing is yellowish tan, heavily suffused and mottled with gray and appearing predominantly gray. The terminal area is gray. The basal and antemedial lines are gray and double, but so diffuse that the lines are nearly melded into one, weakly filled with the ground color. The antemedial line is slightly irregular and angled slightly toward the outer margin. The median line is dark gray, diffuse, appearing mostly as part of the mottling rather than as a distinct line. The postmedial line is dark gray, dentate, more sharply-defined than the other lines, drawn basad on the cotsa, nearly perpendicular to the costal margin near the reniform spot, and angled weakly toward the base below the level of the cell. The subterminal line is the ground color, weak or absent, evident mostly as the transition between the subterminal and terminal areas. It is preceded by a weak gray shade. Dark gray spots form the terminal line. The fringe is similar to the terminal area. The orbicular and reniform spots are outlined in dark gray and are moderate-sized. The orbicular spot is round, lined peripherally with light gray with a dark central ocellus. The reniform spot is weakly hourglass-shaped, lined with the ground color and filled with darker gray-brown, darkest at the lower end. The clavioform spot is dark gray, small and narrow. The hindwing is tan-gray, slightly darker gray toward the margin, with a dark discal spot and terminal line. The hindwing fringe is off-white with a gray base. The head and thorax are powdery gray-tan with faint barring on the collar. A frontal tubercle is present. The male antenna is weakly biserrate. Euxoa latro is a member of the large subgenus Euxoa.

This species can usually be recognized by the combination of high Cascade habitat, fall flight period, small size, powdery and mottled tan and gray forewing with diffuse lines, and a round orbicular spot with dark outline, pale gray filling, and a dark ocellus. It is related to and resembles Euxoa moerens, a desert denizen that flies in sage steppe in southeastern Oregon. These species are easily distinguished by habitat and locality, but the forewing of E. latro is darker and grayer, and its hindwing is darker and browner than those of E. moerens. The mottled forewing and round orbicular spot of E. latro are similar to several species in the subgenus Orosagrotis, especially Euxoa taura. It is a rare species that has been collected in the mountains of southwestern British Columbia. Both wings of E. taura are lighter in color than those of E. latro and its markings are less powdery. Limited data suggests that E. latro flies later in the year than E. taura.

Euxoa latro only occurs near the summit and east slope of the Cascade Range in our region.

The range of this species extends to northern Baja California, Mexico through the Sierra Nevada and Transverse Ranges of California. It also occurs in the La Sal Mountains of Utah (Lafontaine 1987).

Euxoa latro has been collected in early September in our region. It is nocturnal and comes to lights.