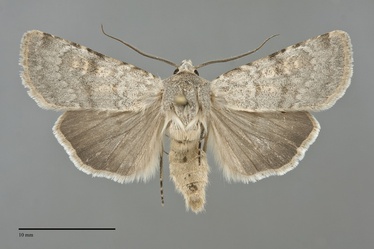 Euxoa lucida is a small to medium-sized Euxoa (FW length 12–16 mm) that flies in southern Idaho and western Montana during late summer. It has washed-out, pale yellow-gray forewings with powdery gray markings, a light-filled orbicular spot, a relatively small dark-filled reniform spot, and "dog-eared" processes on the female ovipositor lobes. The forewing is light yellow-tan to pale gray-tan, powdery due to a sprinkling of gray scales. The distal wing is darker due to increase in the number of gray scales. The lines are powdery gray but often pale and indistinct, partially double with components of unequal strength, filled with a slightly lighter shade of the ground color. The basal and antemedial lines are similar, nearly perpendicular to the forewing and toothed basad on the veins. The medial line is usually evident, powdery gray. The postmedial line has a stronger moderately scalloped inner component followed by a light line, often lacking an outer dark component, pulled slightly toward the base on the costa, widely and smoothly arched around the reniform spot, and then straight or slightly concave at an angle toward the base below the level of the cell. The subterminal line is the same color as the filling of the other lines, weak, powdery, and irregular. The fringe is the ground color, lighter than the terminal area, without a strong terminal line at its base. The orbicular and reniform spots are outlined in the pale color of the line filling. The orbicular spot is a small pale oval, lacking an ocellus. The reniform spot is bar-like, small, filled with powdery gray. No claviform spot is present. The hindwing is tan-gray with darker gray margin and barely visible discal spot, and slightly darker veins and terminal line. The hindwing fringe is white with a tan or light gray base. The head and thorax match the forewing. A frontal tubercle is present. The male antenna is biserrate. Sclerotized flanges at the apices of the female ovipositor lobes are bent toward the sides, appearing "dog-eared" (Lafontaine 1987).

This species can be recognized by its south Idaho or western Montana locality, late summer flight period, and washed-out light yellow-gray or gray-tan forewing with indistinct dark markings, pale orbicular spot lacking a dark outline or filling, and dark bar-like reniform spot. It is most likely to be confused with Euxoa comosa which flies in forests near the localities where E. lucida occur. It is a variable species but tends to be darker brown or gray with similar but darker and "crisper" markings. The females have an apical process from each ovipositor, but it is straight or curved slightly rather than bent as in E. lucida. There are no structural characters separating males of these species (Lafontaine 1987).

Euxoa is a very large genus with many similar species, many of which are also quite variable. The genus is defined by a saccular extension of the valves in males and sclerotized plates on the dorsal and ventral ductus bursae in females. The genus was revised by Lafontaine (1987) in the Moths of North America series and is divided into eight subgenera base on structural characters. These moths are amongst the most difficult to identify. Even though the forewing color and strength of various markings can vary significantly in some of the species, the shape of the lines and spots and the color of the hindwings (often different in the sexes) are more constant. The habitat and flight period are also important in helping to narrow the possibilities.

This species occurs in open juniper woodlands in southern Idaho.

Euxoa lucida has been found in extreme southeastern Idaho in the Northwest region. It is also recorded from western Montana.

This species has a relatively small range in the Rocky Mountain and Intermountain regions. It occurs in Wyoming, Colorado, Utah, Nevada, eastern California, and central Arizona outside of the Pacific Northwest.

Adults are on the wing during late summer and early fall. It was collected in late August in Idaho. This species is nocturnal and comes readily to lights.