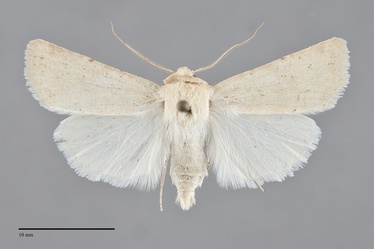 Euxoa tronellus is a pallid, small to medium-sized Euxoa (FW length 14—17 mm) that flies in dry interior steppe habitats in the fall. It has with scattered, dark scales and often dark gray in the reniform spot. The forewing is cream-colored with a salt-and-pepper sprinkling of dark gray scales that varies from light to strong, usually very light in males and darkest in females. The costa near the subterminal line and the terminal are are darkest, appearing even gray when heavily suffused. Only traces of the dark lines are present even in the darkest specimens. The position of the subterminal line is evident as the medial border of the terminal area if it is dark. Dark spots form the terminal line in some dark specimens. The orbicular and claviform spots are usually absent, a few specimens show a the orbicular spot as a dark dot. The reniform spot is a powdery gray lunule. The hindwing is pure white in both sexes. Euxoa tronellus is a member of the subgenus Euxoa.

This species is usually identified relatively easily by its nearly immaculate cream color, or cream with powdery gray reniform spot and terminal area. It is most likely to be confused with pale specimens of Euxoa citricolor, with which it flies in sandy or other bare-ground habitats. It is clearly yellow, not cream or buff as in E. tronellus. Nearly white specimens of E. tronellus could potentially be mistaken for Protogygia album, but E. tronellus lacks a small, black spot at the lower end of the cell typical of P. album have, and the ground color of E. tronellus is less pure. Euxoa catenula, a more common and widespread moth, is whitish-gray with a less warm color and has better-defined markings. Very pale specimens of Euxoa misturata could potentially be mistaken for heavily marked specimens of E. tronellus. Its markings are also more prominent and include an oval orbicular spot and serrate postmedial line.

This species is widely distributed in arid rangelands throughout much of western North America, including short-grass prairie on the Great Plains.  In the Pacific Northwest, it occurs on disturbed grasslands and rangelands at low elevations and is locally common in eastern Oregon.  However, it appears to be mostly absent from undisturbed sagebrush steppe. This species is rare at the northern limit of its range in Washington and has only been collected near the Columbia River in the driest part of the state.

This species is fairly widely distributed in the Northern Basin and Range biome in eastern Oregon. It has only been found near Vantage near the Columbia River in west-central Washington.

This species is found in the northern Great Plains and throughout the Great Basin. South of the Pacific Northwest it occurs to southern California, and the range extends east to Wyoming, Colorado, and New Mexico in the Rocky Mountain region. In the Great Plains region it occurs from the adjacent portions of southern Alberta and Saskatchewan to southwestern South Dakota and Wyoming (Lafontaine 1987).

This species flies in the fall, with records from the Pacific Northwest from September and early October. It is nocturnal and comes to lights.