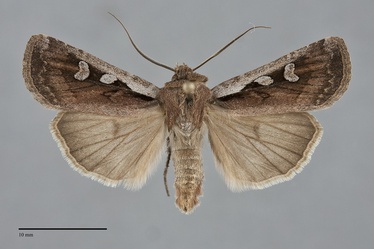 Euxoa idahoensis is a small to medium-sized Euxoa (FW length 14–17 mm) that flies in a variety of forested habitats during the summer. It has dark gray-brown forewings, light-gray costal margin, and similar filling of the spots. It is smooth medium to dark gray-brown, darker gray-brown to black in the cell. The costa is pale gray or silvery gray, less often gray-tan, fading by the postmedial line. The cubital vein is similar light gray in some specimens. The terminal area is often grayer than the rest of the forewing, but not much darker. A thick black basal dash appears to be fused to the base of the claviform in some specimens. The transverse lines are weak. Most specimens have an oblique black segment of the antemedial line at the base of the costa. The postmedial line is smooth or lightly scalloped, bluntly curved around the reniform spot and then nearly straight or slightly concave at a 45° angle toward the base. The subterminal line is ochre, tan, or gray, powdery and often incomplete, slightly irregular with an offset below the apex and a weak "W" mark on the mid-forewing. It is preceded by a grayshade at the costa and usually a series of small black wedges on the mid-fprewing. The terminal line is dark, thin. The fringe matches the terminal area. The orbicular and reniform spots are outlined in dark gray or black and are lined with light to medium gray. The orbicular spot is oval or broadly V-shaped, moderate in size, open anteriorly, filled with the color of the costa and appearing fused with it. The reniform spot is kidney-shaped, darker-filled than the orbicular spot. The claviform spot is black, absent, weak, or solid black, small to moderate-sized and narrow, appearing fused to the basal dash in some specimens. The hindwing is medium-dark brown-gray with slightly darker outer half, discal spot, veins, and terminal line. The fringe is light gray with a darker base. The head and thorax are dark brown. The collar is lighter brown than the rest of the thorax in some specimens with a transverse black line across the mid-portion. A frontal tubercle is present. The male antenna is weakly bipectinate. Euxoa idahoensis is a member of the large subgenus Euxoa.

This species can usually be recognized by its dark brown forewing lacking warm yellow or red tones and gray to silvery costa. Specimens lacking a pale cubital vein are most distinctive. Euxoa idahoensis is most likely to be confused with Euxoa castanea and Euxoa furtivus. It can be distinguished from E. castanea by the color of the forewing and costa, warmer brown and yellow respectively in E. castanea. It is easily confused with Euxoa furtivus. This species was lumped with E. idahoensis at the time of the MONA fascicle (Lafontaine 1987) and was not formally recognized as distinct until recently (Schmidt and Anweiler 2010). Compared to E. idahoensis, E. furtivus is streakier, with a consistently pale cubital vein and proximal branches, dark veins elsewhere on the distal wing, and long black wedges in the subterminal area. The cubital line of E. idahoensis may be light but its branches are not, and dark preceding the subterminal line is a dark shade without wedges. The forewing spots are pale-filled in E. idahoensis, whereas those of E. furtivus usually have a darker centers. Euxoa costata is marked similarly to E. idahoensis but is bright red-brown rather than dark brown.

The type locality of Agrotis idahoensis Grote is Idaho.

This species is widely distributed in western North America in coniferous forests.  It is common in a variety of habitats in the Pacific Northwest east of the Cascades, but is most consistently found in forested habitats. It is found in dry, open ponderosa pine forests and juniper woodlands at middle elevations, and in dry meadows and on rocky ridgetops at high elevations.  It is also common on dry sagebrush steppe at low elevations, particularly during wet years, but becomes scarce in this habitat during drought years.

Euxoa idahoensis is widely distributed in forests throughout our region east of the Coast and Cascade Ranges. It has been collected as far north as south-central British Columbia.

The range of E. idahoensis included much of western North America. It occurs from central Alaska to south-eastern Saskatchewan and the Black Hills of South Dakota, south in the Rocky Mountains to New Mexico and Arizona, and west to central California.

No information is presently available regarding larval foodplants of this species, but it is probably a soil-surface feeding cutworm that feeds on herbaceous vegetation based on closely related species.

Adults of E. idahoensis fly during the summer, usually slightly later than E. furtivus. Collection records from the Pacific Northwest range from early June to early August. It is nocturnal and comes to lights.