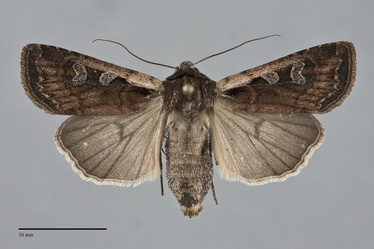 Euxoa castanea is a small to medium-sized Euxoa (FW length 14–17 mm) that flies in forests during the summer. It has dark, warm brown forewings, an ochre costal margin, and whitish-gray cubital vein and lining of the spots. The forewing is dark brown, slightly lighter warm wood-brown along the posterior wing and in the subterminal area and darker brown to black in and near the cell. The apex is gray in some specimens and the rest of the terminal area is dark gray. The costa is ochre yellow, fading before the postmedial line. A thick black basal dash appears to be fused to the base of the claviform in some specimens. The cubital vein is whitish gray to the reniform spot. The ordinary transverse lines are very weak. Most specimens show portions of the gray antemedial and postmedial lines. The antemedial line is present posterior to the cell, uneven and angled slightly toward the outer margin. The smooth or lightly scalloped postmedial line is evenly curved around the reniform spot and then nearly straight or slightly concave at a 45° angle toward the base. The subterminal line is light orange-tan to tan, powdery and often incomplete, slightly irregular with an offset below the apex and a weak W-mark on the mid-forewing. It is preceded by a grayshade at the costa and usually a series of small black wedges on the mid-wing. The terminal line is dark, thin. The fringe matches the terminal area. The orbicular and reniform spots are outlined in dark gray and are lined with light gray to ochre. The orbicular spot is oval, small to moderate in size, open anteriorly, usually with slightly or much darker center. The reniform spot is kidney-shaped, filled with darker than the orbicular spot. The claviform spot is black, small to moderate-sized, narrow, appearing fused to the basal dash in some specimens. The hindwing is medium-dark gray with darker outer half, discal spot, veins, and terminal line. The fringe is light gray with a darker base. The head and thorax are dark brown. The base of the collar matches the costa, silver-gray or ochre, bordered with a distinct black line. A frontal tubercle is present. The male antenna is widely biserrate. Euxoa castanea is a member of the subgenus Euxoa.

This species can be recognized by its dark but warm brown color and pale yellow costa. It is most likely to be confused with Euxoa idahoensis, but it has a gray-brown forewing and light gray costa, lacking the warm tones of E. castanea and also often lacks a pale cubital vein. Euxoa castanea could potentially be mistaken for Euxoa flavicollis, a species in the subgenus Orosagrotis, with which it flies. It has a pale streak in the fold that E. castanea lacks. Euxoa costata has a similar forewing pattern as E. castanea but is bright reddish-brown rather than dark brown.

This species is widely distributed in both coniferous and quaking aspen forests.  In the Pacific Northwest, it is common at middle to high elevations in open ponderosa pine forests and mixed conifer forests in the northern and eastern mountains.  It also occurs in quaking aspen forests at high elevations in the Steens Mountains of southeastern Oregon.  It is rarer in ponderosa pine forests along the east slope of the Cascades and in mid-elevation juniper forests. Euxoa castanea is largely replaced ecologically by E. costata in the Cascades, although there is a zone of overlap in northern Idaho, eastern Oregon, and the Oregon Cascades.

This species is found in forests throughout most of the Pacific Northwest east of the Coast and Cascade Ranges. It has not been found along the east slope of the Cascades in Washington, and it does not occur in xeric steppe habitats.

The range of this species is mostly to the east of the range of Euxoa costata except in southern British Columbia and northern Idaho. It occurs on the Great Plains and in the Rocky Mountains. The eastern limit of its range is Manitoba, and the southern limit in the Rockies is New Mexico and Arizona.

This species flies during the summer and has been collected in July and August in the Pacific Northwest. It is nocturnal and comes to lights.