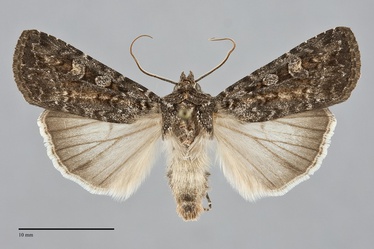 Euxoa pleuritica is a small to medium-sized Euxoa (FW length 14–18 mm) that flies in the dry interior of the Northwest from late spring through the summer. It has a mottled, dark brown and light, coppery brown color and busy pattern of lines and spots. The forewing is slightly powdery gray-brown with patchy warmer coppery tan on the posterior and mid-forewing from the base to the subterminal area. The terminal area is dark gray. The veins are dark on the posterior and distal wing, with dark adjacent suffusion in the subterminal area. The basal and antemedial lines are dark gray, double filled with yellow-tan, toothed on the veins and oriented nearly perpendicular to the wing. The median line is gray, diffuse and faint to dark and irregular. The postmedial line is double with toothed dark gray inner component and a smoother and lighter outer one, sharply drawn toward the base on the costa, bluntly curved around the reniform spot, angled and slightly concave toward the base below the level of the cell. The veins are spotted light and dark at the tips of the teeth in many specimens. The subterminal line is yellow-tan, slightly irregular with an offset below the apex and a weak "W" mark on the mid-forewing. It is preceded by a dark brown-gray shade on the costa and below the level of the cell. The terminal line is a dark gray line or a series of spots. The fringe is similar to the terminal area. The orbicular and reniform spots are outlined in thin dark gray outer and slightly yellowish inner lines and filled with powdery gray-tan. The orbicular spot is round or weakly oval. The reniform spot is kidney-shaped, moderate-sized, with a gray spot at the lower end. The claviform spot is small, gray. The hindwing is pale tan-gray with an ill-defined dark gray marginal band on the outer third in both sexes, with dark discal spot, veins, and terminal line. The hindwing fringe is white with a gray base. The head and thorax are powdery grayish tan to dark gray-brown with a thin dark line across the mid-collar. The male antenna is strongly biserrate with long fasciculatons, tapering over the lateral half. A frontal tubercle is present. Euxoa simona is a member of the subgenus Pleonectopoda which is characterized by a twist or coil near the base of the male vesica. It belongs to the subgenus Pleonectopoda.

This species can usually be recognized by its strongly mottled pattern of gray-brown and coppery brown. Lafontaine (1987) suggests that fresh specimens have an olive cast. It is most similar to Euxoa simona in color and pattern, but can usually be distinguished from it by size, since most specimens of E. simona have forewings longer than 18 mm. Euxoa aberrans is also similar, but has more even powdery brown forewing color,  paler inner lining of the orbicular and reniform spots, and darker hindwings. Euxoa tessellata can also be mottled with a similar pattern. It is usually grayer without a coppery tint. Its wings are broader than those of E. pleuritica, and males often have a yellow spot at the base of the forewing that E. pleuritica lacks. The tips of the ovipositor lobes are truncate in E. tesselata, conical in E. pleuritica.

This species occurs on open grasslands and in dry woodlands of the Great Plains and Rocky Mountain regions. The habitat in the Pacific Northwest is poorly known, but appears to be steppe based upon the distribution. It might favor bunchgrass steppe over sage shrub steppe.

This species has a large range in North America. It is found as far east as New England. In the West the range extends south from central Alberta and our region to the northern portions of New Mexico and Arizona.

This species is a soil-surface feeding cutworm that feeds on herbaceous vegetation such as the Asteraceae.

The flight season is late May to mid-October (Lafontaine 1987).