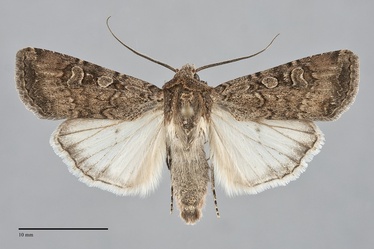 Euxoa septentrionalis is a stout, moderately large, gray-brown Euxoa (FW length 16–19 mm) that flies on both sides of the Cascades during late summer and fall Its forewing has dark filling of the cell and a pale-filled round orbicular spot with a dark ocellus. The ground color is fairly constant, slightly mottled gray-brown, always with darker gray-brown in the cell bordered by light gray on the cubital and radial veins. The forewing is slightly powdery and some specimens have a brassy tint. The basal and antemedial lines are dark gray to black, double with components of similar darkness, and filled with the ground color. Both are pulled slightly toward the base on the veins; the antemedial line is slanted slightly toward the outer margin and often has a lateral bulge at the posterior margin. The median line is gray, usually evident, angled toward the base anterior and posterior to the reniform spot. The postmedial line is dark gray, double with darker evenly mildly scalloped inner component and fainter even outer component, filled with the ground color. It is drawn toward the base on the costa, is bluntly curved around the reniform spot, and slanted toward the base to the posterior margin with a slightly concave segment below the spot. The subterminal line is pale, slightly luteous, irregular with an offset below the apex and a weak "W" mark on M3 and CuA1. It is preceded by a dark gray spot on the costa and a dark gray to black shade below the level of the anterior cell that is usually divided into ill-defined spots or short wedges. The terminal line is thin and dark, interrupted at the veins. The fringe is similar to the terminal area. The orbicular and reniform spots are outlined in dark gray to black and are accentuated by the adjacent dark filling of the cell. The orbicular spot is round, slightly larger than the width of the cell, often open toward the costa and darkest at the medial and lateral ends, filled with a slightly lighter shade of the ground color or slightly paler gray and a variable central ocellus. The reniform spot is kidney-shaped, larger than the width of the cell with the lower end ill-defined and projecting posterior to CuA1, with similar filling as the orbicular spot with a gray central lunule. The claviform spot is small, gray to black. The hindwing is whitish in males and gray in females, with a narrow gray marginal band in males up to 1/3x the wing width, wider 1/2x the width in females. Gray discal spot and veins are present and there is a very dark terminal line is present at the base of the pale fringe. The head and thorax are nearly uniform dark gray-brown with a weak black line near the edge of the collar in some specimens. The male antenna is bipectinate, tapering distally. Euxoa septentrionalis is one of two members of the subgenus Heteroeuxoa in the Northwest. This subgenus is defined in males by asymmetrical saccular extensions with the larger right one stout and bearing a twisted "fin-like" apical extension. Females have an asymmetric sclerotized extension in the ventral wall of the ductus bursae that is broader on the left.

This species can be recognized by the combination of fall flight period, a relatively stout body, dark gray-brown color with darker brown cell, round orbicular spot with a central ocellus, postmedial line with scalloped inner and smooth outer components, and a pale hindwing with a dark marginal band. It is most likely to be confused with Euxoa messoria, a common and variable species with which it flies. Compared to E. messoria, E. septentrionalis tends to be slightly larger, darker brown, and has a rounder and lighter-colored orbicular spot with a dark central spot; the orbicular spot of E. messoria is oval without a paler inner ring or central dark spot. Euxoa terrenus is also similar in color and markings to E. septentrionalis. It usually flies earlier in the year than E. septentrionalis and is likely to be worn if they occur together. The hindwing of E. septentrionalis is lighter than that of E. terrenus.

Euxoa is a very large genus with many similar species, many of which are also quite variable. The genus is defined by a saccular extension of the valves in males and sclerotized plates on the dorsal and ventral ductus bursae in females. The genus was revised by Lafontaine (1987) in the Moths of North America series and is divided into eight subgenera based on structural characters. These moths are among the most difficult to identify. Even though the forewing color and strength of various markings can vary significantly in some of the species, the shape of the lines and spots and the color of the hindwings, although often different in the sexes, are more constant. The habitat and flight period are important in helping to narrow the possibilities.

Euxoa septentrionalis is widespread in the Pacific Northwest where it occurs on both sides of the Coast and Cascade Ranges as far north as southern British Columbia. It is increasingly rare on the west side of the Cascades in Washington.

This species is found in western North America south to Colorado, southwestern Arizona, and southern California (Lafontaine 1987) outside of the Northwest.

Adults fly in late summer and fall. Scattered Pacific Northwest records are from as early as June, but most specimens are collected in August and September. It is nocturnal and comes to light. This species has been collected at sugar bait in eastern Washington.