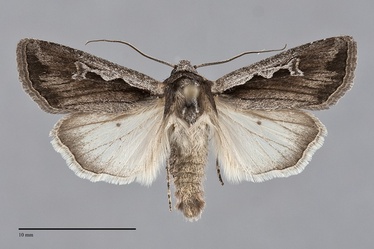 Euxoa hollemani is a common, small Euxoa (FW length 12–15 mm) that flies east of the Cascade Range during the fall. Its forewing has a distinctive pattern of light-filled fused orbicular and reniform spots and a light gray costa. The forewing ground color is best described as steel-gray, but a large portion of the mid-forewing is wood-brown. The brown extends distally in the subterminal area along the dark veins. The costa is lighter gray, lightest near the base. The terminal area is dark gray. The cell and a thick basal dash are black. The position of the irregular subterminal line is the toothed transition between the lighter subterminal and darker terminal areas but is not marked otherwise. The pale subterminal area reaches the margin as a "W" mark along veins M3 and CuA1. The terminal line is dark. The fringe is light gray. None of the other transverse lines are evident. The orbicular and reniform spots are outlined in black and filled with light gray peripherally and darker gray centrally, strongest in the reniform spot. The orbicular spot is oval, very long and most often fused to the V-shaped reniform spot. The claviform spot is a black streak at the end of the basal dash. The hindwing is pale whitish gray with gray near the margin in males, darker gray-brown with a wider marginal band in females, with dark discal spot, veins, and terminal line in both sexes. The hindwing fringe is white with a tan and patchy gray base. Most of the head and thorax are gray-brown. The base of the collar is light gray, separated from the darker edge by a black transverse line. A frontal tubercle is present. The male antenna is biserrate. Euxoa hollemani is a member of the large subgenus Euxoa.

This species can be identified by its fall flight period, small size, pale costa, and pale gray fused and elongate orbicular and reniform spots. It can only be confused with Euxoa subandera – these species were confused taxonomically for many years – a rare darker species that flies earlier in the summer. Euxoa subandera is darker, especially the male hindwing, has slightly smaller forewing spots, and a yellower costa. The shape and filling of the orbicular spot differs between these moths. That of E. hollemani is narrower at the attachment to the reniform spot and is uniformly filled with light gray; that of E. subandera is often broadly attached to the reniform spot and is thinly lined with pale gray and filled centrally with the darker ground color.

This species is widely distributed in dry forests and rangelands throughout much of western North America.  In the Pacific Northwest, it is common to abundant in dry open ponderosa pine forests, juniper woodlands, and sage steppe at low to middle elevations. It is most numerous during drought years, and is mostly absent from forests during wet years. This species is uncommon at high elevations but is occasionally collected on dry ridges and in forest openings.

Euxoa hollemani occurs south from south-central British Columbia through the dry interiors of Washington, Oregon, and southern Idaho. It has not been collected west of the Cascade or British Columbia Coast Ranges.

The range of this species extends south to the central portions of New Mexico and Arizona as well as to southern California. There are a few records from the western Great Plains as far north as Montana.

Adults fly in the fall around the time of peak flowering of rabbitbrush (Ericameria nauseosus, Asteraceae), beginning in early August and peaking in mid-September. It is nocturnal and comes to lights. Adults seek nectar at rabbitbrush.