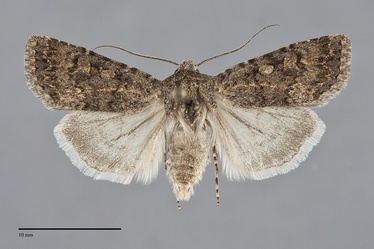 Euxoa moerens is a small Euxoa (FW length 12–14 mm) that flies in sage steppe in southeastern Oregon and adjacent Idaho during the fall. It has a mottled gray-tan forewing with gray transverse lines and a round, dark-rimmed, pale-filled orbicular spot, and an off-white hindwing. The forewing is yellowish gray-tan with a slight brassy sheen, moderately suffused and mottled with gray. The terminal area is gray. The basal and antemedial lines are dark gray, double with unequal components, and filled with the ground color. The antemedial line is slightly irregular and angled toward the outer margin. The median line is gray and diffuse. The postmedial line is dark gray, slightly scalloped, drawn basad on the cotsa, curved close to the reniform spot, and angled slightly toward the base below the cell. The subterminal line is yellow-tan, often broken into spots and slightly irregular. It is preceded by a weak gray shade, strongest on the costa. The terminal line is thin or a series of dark gray spots. The fringe matches the terminal area. The orbicular and reniform spots are outlined in dark gray and are moderate-sized. The orbicular spot is round, filled with light gray and sometimes containing a gray ocellus. The reniform spot is kidney-shaped, filled with the ground color and a gray spot at the lower end. The claviform spot is variable, usually absent or small and gray. The hindwing and fringe are tan-gray off-white, sometimes with a diffuse light gray marginal band, with slightly darker gray veins, discal spot, and terminal line. The head and thorax are even gray-tan. A frontal tubercle is present. The male antenna is weakly biserrate. Euxoa moerens is a member of the large subgenus Euxoa.

This species can usually be recognized by its small size, gray-tan color, round dark-outlined and pale-filled orbicular spot, and off-white hindwing. It is smaller than most other fall-flying Euxoa species with which it occurs. It is similar to Euxoa latro in pattern, but is paler on both wings. This rare species flies in the high Cascade Mountains and can therefore be distinguished by locality alone. Euxoa moerens can be confused with small specimens of Euxoa difformis, a common and variable species with which it flies. The hindwing of E. difformis has a characteristic scalloped median band, dark discal spot, and dark marginal band that are lacking in E. moerens. On the forewing, the postmedial band of E. moerens is close to the reniform spot and the subterminal line is irregular, while the postmedial line of E. difformis is widely separated from the reniform spot and the subterminal band is smoother.

This species is widely distributed throughout much of western North America in arid grasslands, rangelands, and dry woodlands, including short-grass prairie on the Great Plains and sagebrush steppe west of the Rocky Mountains.  In the Pacific Northwest, it is restricted to dry sagebrush steppe in the Great Basin region.  During wet years, it is often very rare and may be restricted to the most barren sagebrush steppe.  However, during drought years it becomes abundant, spreading over all rangeland habitats including moist areas near wetlands.

Euxoa moerens is found throughout most of southeastern Oregon as far north as the Blue Mountains. It has also been recorded in southwestern Idaho. E. moerens has not been found further north in the Pacific Northwest.

This species occurs in the Intermountain Region to central Colorado, northern Arizona, central Nevada, and east-central California. It also occurs from southern Canada to Colorado on the western Great Plains.

This species is a soil-surface feeding cutworm that feeds on herbaceous vegetation such as legumes (Fabaceae).

Euxoa moerens flies in the fall. It has been collected during September in our region. It is nocturnal and comes to lights.