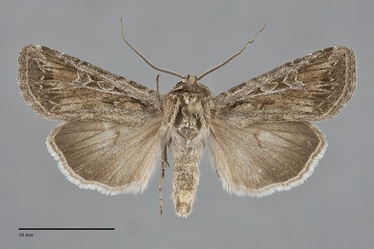 Euxoa hardwicki is a rare, streaky pale gray-tan, small to medium-sized Euxoa (FW length 14–16 mm) that flies in sandy Columbia Basin habitats during late spring and early summer. The forewing has a slightly pointed apex. It is washed-out gray-tan, warmer tan in the fold and medial subterminal area than elsewhere. The costa, cubital vein proximal to the postmedial line, and the apex are light gray, as are the distal veins and the adjacent interspaces below the apex and at the "W" mark on M3 and CuA1. The terminal area is gray, but not significantly darker than the rest of the forewing. A few dark gray scales below the cubital vein suggest a weak subbasal dash. Paired gray spots are present on the costa at the origins of the basal, antemedial, and postmedial lines. A segment of the antemedial line is evident on the mid-wing. The postmedial line is suggested by a few gray and pale scales lateral to the reniform spot and at a steep angle toward the lower margin below the spot. The subterminal line is pale gray, slightly irregular with an offset below the apex and a W-mark where it is traversed by the pale M3 and CuA1. It is preceded by a slight gray shade on the costa and on the mid-wing, sometimes also by thin and relatively weak black chevrons between the veins at the W-mark. The terminal line is dark gray, thin or a series of small spots. The fringe is pale gray with a light tan base. The orbicular and reniform spots are weakly and partially outlined by a thin gray line, lined internally by light gray. The orbicular spot is teardrop-shaped, tapered toward the outer margin and often fused with the reniform spot, filled entirely with light gray or centrally with the ground color. The reniform spot is C-shaped or boomerang-shaped, filled similarly to the orbicular spot but usually with more dark central filling. The clavifom spot is absent or small and gray. The hindwing is pale gray-tan with ill-defined gray toward the margin, slightly darker gray discal spot, veins, and terminal line. The hindwing fringe is white with a tan base. The head and thorax are powdery gray-tan with a thin black line across the mid-collar. The frons bears a moderate tubercle. The male antenna is biserrate. Euxoa hardwicki is a member of the large subgenus Euxoa.

This species can be identified by its relatively early flight period, washed-out gray-tan color with light gray costa and veins, and oval orbicular spot that tapers toward the reniform spot and is often fused with it. It could be confused with Euxoa melura, Euxoa furtivus and Euxoa olivalis, which also fly in the spring and early summer in similar environments. Only E. harwicki has a teardrop-shaped orbicular spot that tapers laterally. Euxoa melura is much streakier with white rather than gray veins. Euxoa olivalis has a long and narrow orbicular spot. Euxoa furtivus is the least similar to E. hardwicki of these moths and is smoother tan in color, usually with much more prominent black chevrons in the distal subterminal area than in E. hardwicki.

Euxoa is a very large genus with many similar species, many of which are also quite variable. The genus is defined by a saccular extension of the valves in males and sclerotized plates on the dorsal and ventral ductus bursae in females. The genus was revised by Lafontaine (1987) in the Moths of North America series, and is divided into eight subgenera based on structural characters. These moths are among the most difficult to identify. Even though the forewing color and strength of various markings can vary significantly in some of the species, the shape of the lines and spots and the color of the hindwings (often different in the sexes) are more constant. The habitat and flight period are also important in helping to narrow the possibilities.

This species is narrowly endemic to sand dunes or sandy river sediments at low elevations in the Columbia Basin. Most records are from the vicinity of the Columbia River and its major tributaries.  It is usually uncommon to rare in this very restricted habitat.

Euxoa hardwicki is found in a small area along the Columbia and Walla Walla Rivers in south-central Washington and adjacent Oregon. The range extends from Cold Springs Junction, Umatilla County, Oregon to Walla Walla and Vantage, Washington.

The only other location for this species noted in the original description is Sweetgrass County, Montana (Lafontaine 1987). It has also been recorded from south-eastern Utah on the Moth Photographers Group web site.

Adults fly in late spring and early summer, with Pacific Northwest records from mid-May to mid-June. It is nocturnal and comes to lights.