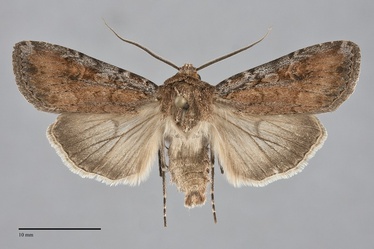 Euxoa nostra is a dull, orange-brown, medium-sized Euxoa (FW 15–19  mm) that flies in dry habitats during the summer. The forewing is medium-dark grayish orange-brown, slightly darker in the cell and on the costa in the subterminal area. The rest of the costa, including the apex, is powdery gray, occasionally weakly gray or tan without gray scales. The terminal area is medium to dark gray. The cubital vein is powdery gray and the distal veins darker gray in some specimens. The basal, and antemedial lines are dark gray on the costa, weaker gray elsewhere, partially double filled and with the ground color. The basal line is excurved. The antemedial line is variable in darkness from absent below the cell to moderately dark across the wing, is slanted slightly toward the outer margin, toothed toward the base on the veins, and often forms a prominent bulge toward the outer margin below 1A+2A. The median line is gray, faint, diffuse, darkest near the costa. The postmedial line is dark on the costa, weaker gray to brown elsewhere and sometimes nearly absent, usually a single toothed line, bent below the costa to course near the lateral reniform spot, straight or slightly concave below the spot where it is angled toward the base. The subterminal line is tan, sinuous, offset below the apex and bulging to near the outer margin on the mid-forewing at M3 and CuA1. It is preceded by a dark gray or brown shade on the costa and a weaker shade and diffuse gray wedges between the veins posterior to the level of the cell. The terminal line is dark gray, interrupted at the veins. The fringe is gray with a tan base. The orbicular and reniform spots are partially outlined in dark gray and are moderately large. The orbicular spot is oval, filled with the ground color, light gray, or peripheral pale tan and central dark gray. The reniform spot is kidney-shaped, filled with the ground color and a dark gray spot at the lower end, sometimes more diffusely filled with gray. The claviform spot is weak, absent or a curved dark gray line at the apex. The hindwing is pale grayish tan, shaded with gray on the outer third, with slightly darker veins, discal spot, and terminal line. The hindwing fringe is white with an ochre and gray base. The head and thorax are powdery orange-brown, sometimes with a thin black transverse line across the mid collar. A frontal tubercle is present. The male antenna is strongly biserrate with long fasciculae. Euxoa choris is a member of the large subgenus Euxoa.

This species can usually be recognized by its orange-brown color, especially in combination with a gray costa. Specimens without significant gray color are most similar to Euxoa tocoyae, but it lacks dark outlines of the forewing spots. Some forms of Euxoa ochrogaster are uniform orange-brown ground color. The have a round orbicular spot, a pale peripheral lining and dark gray filling of the reniform spot, and darker gray terminal area than E. nostra. Other orange-colored Euxoa species differ greatly in pattern (Euxoa pluralis) or are redder (Euxoa ustulata).

This species is widely distributed in dry forest and woodland habitats in western North America.  In the Pacific Northwest, it is locally common in juniper woodlands and mesic sagebrush steppe near wetlands at middle to low elevations east of the Cascades.  It is less common in higher-elevation spruce-fir forests in the high Cascades and in ponderosa pine forests east of the summit.  An apparently disjunct population occurs on barren, serpentine ridgetops in the Siskiyou Mountains of southwestern Oregon.

Euxoa nostra is widely distributed in the Pacific Northwest as far north as southern British Columbia. It is limited to the eastern Cascade foothills, the adjacent western part of the Columbia Basin, and Blue Mountains in Washington. It is found more extensively in eastern Oregon and also occurs in the Siskiyou Mountains. Euxoa nostra has been collected in southern Idaho.

Adults of E. nostra are on the wing from early June to mid-August, with collection dates of most specimens from late June to early August. It is nocturnal and comes to lights.