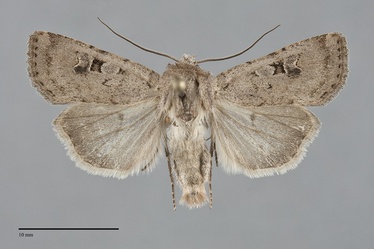 Euxoa munis is a small Euxoa (FW length 13–15 mm) that flies in eastern Oregon, Idaho, and western Montana during late summer and fall. It has pale gray to pinkish gray forewings with dark in the cell between the spots and in the lower reniform spot. The forewing is relatively short and broad. The color is light clay-gray, sometimes suffused with a pink cast over the entire forewing. The terminal area is powdery, neutral gray in some specimens. The cell is dark usually black or a combination of red-brown and black. The basal, antemedial, and subterminal lines are gray, faint and powdery and often partially or entirely absent, simple or double with filling of the ground color. The antemedial line is evident on the costa. The antemedial line is irregular, often ballooned toward the outer margin below 1A+2A. The median line is usually absent, sometimes visible near the costa. The postmedial line is weakly toothed, very thin and faint or absent except for a spot on the costa. The subterminal line is the gray ground color, also weak and nearly obsolete except when preceded by a diffuse or patchy gray or brown shade. The terminal line is dark, thin or broken into spots. The fringe is concolorous with the wing. The orbicular and reniform spots are partially outlined by black on the medial and lateral sides. The orbicular spot is moderately large, oval, filled with a slightly lighter shade of the ground color peripherally and faintly darker centrally. The reniform spot is lined with pale luteous and filled with the ground color and a dark ray spot in the lower end. The claviform spot is small and weak, evident near its apex. The hindwing is pale gray-tan, barely darker near the margin, with a dark discal spot. The fringe is off-white with a tan base. The head and thorax are uniform gray, matching the forewing color. A frontal tubercle is present. The male antenna is biserrate. This moth is a member of the subgenus Euxoa.

Euxoa munis can be recognized by its short stubby wings, pale gray color, and reduced markings with dark in the cell and lower reniform spot. It is unlikely to be confused with other Euxoa species in our area. Poorly marked specimens resemble Xestia cinerascens, but the filling of the orbicular and reniform spots of this moth are darker than the ground color, not the same or lighter as in E. munis.

This species is widely distributed in forested habitats.  In the Pacific Northwest, it is most common at mid-elevations in wetlands with willows, but can be collected in a variety of habitats.  An epidemic outbreak of this species was observed in mixed conifer forests of ponderosa pine and Douglas fir in the Blue Mountains during a drought year, but numbers greatly decreased in both the Blue Mountains and along the east slope of the Cascades during wet years.  This species is usually rare and sporadic in high-elevation spruce-fir forests and in mid-elevation juniper woodlands.

Euxoa munis is found in western Montana, central and southern Idaho, and eastern Oregon in the Pacific Northwest. It has not been collected in British Columbia or Washington.

This species occurs from central Alberta to southeastern Wyoming, central Colorado, and northeastern Arizona in the Rocky Mountain region, ranging west to our region and most of California.

The flight period of E. munis is late summer and fall. It has been found form late July until mid-September in our region. This species is nocturnal and comes to lights.