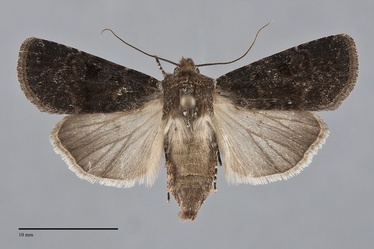 Euxoa intrita is a small to medium-sized Euxoa (FW length 13–17 mm) that flies in forests during late summer and fall. It has relatively broad and stubby forewings, very variable even to mottled light to dark orangish, reddish, or grayish brown forewing and a two-toned hindwing. The stubby forewing has a rounded outer margin and a blunt to squared-off apex. A number of different color forms exist, usually either smooth with a darker and grayer distal wing and inconspicuous lines, or strongly mottled with dark lines with light fillings. The cell can be dark in either form. The color varies from light orange-brown or gray-tan, medium-dark red-brown, brown, or gray-brown, to very dark brown-black. The medium-dark forms can be smooth or strongly powdered with dark scales. When evident the basal and antemedial lines are dark brown, double, filled with the ground color or a slightly lighter shade thereof, irregular and oriented nearly perpendicular to the posterior margin, placed fairly close to each other. The median line is variable, absent, diffuse, or dark and irregular, weak excurved. The postmedial line has a weakly scalloped inner component and a more faint smoother outer one, is drawn slightly toward the base on the costa, is nearly straight and perpendicular to the costa opposite the reniform spot, bent on the cubital vein and nearly straight at a slightly angle toward the base across the lower forewing. The subterminal line is pale, tan or light orange, irregular with a slight offset below the apex and a very weak "W" mark on the mid-forewing, located near the outer margin. It is preceded by an even shade that is concolorous with the terminal area, and lacks preceding spots or chevrons. The orbicular and reniform spots are outlined by faint gray or a dark shade of the ground color. The orbicular spot is round, filled with the ground color centrally and a pale shade thereof peripherally. The reniform spot is kidney-shaped, usually lined by luteous scales and filled with the ground color. No claviform spot is present. The male hindwing is brownish off-white with a slight yellow cast, with a moderately well-demarcated gray marginal band containing a marginal pale arc near the anal angle, gray veins, discal spot, and terminal line; that of females is darker brown-gray with smoky dark gray margin, barely darker discal spot and veins, and a two-toned gray fringe. The head and thorax match the forewing color without darker markings. Males often have a patch of orange scales at the costal attachment of the forewing. The head bears a frontal tubercle. The male antenna is bipectinate, appearing thick except near its tip. Euxoa intrita belongs to the species-rich subfamily Euxoa.

Males of this species are relatively easy to identify despite the great variablility in color and pattern due to their broad wings, warm red-brown or orange-brown color, and pale hindwing with ill-defined "dirty" gray marginal shading. Specimens with dark in the cell and yellow in the reniform spot are especially characteristic of this moth. Another feature is the patch of orange scales at the base of the forewings. Females are less obvious due to their dark hindwings, but are usually identifiable without dissection due to the rich dark brown forewing color and their short, broad forewing shape.

This species is widely distributed in dry forest or moist grassland habitats.  In the Pacific Northwest, it is moderately common in dry grasslands at low elevations west of the Cascades.  East of the Cascades, it is common to abundant in low to middle elevations in wet grasslands or meadows near marshes or in the riparian zone along creeks and rivers where it may experience epidemic outbreaks.  It is also common in open ponderosa pine forests at middle elevations, but is rare at higher elevations.

Euxoa intrita is found in forests throughout the Pacific Northwest as far north as southern British Columbia. It occurs on both sides of the Coast and Cascade Ranges. It is not found in the dry interior.

The range of this species extends across the northern United States and southern Canada to western Quebec. The southern limits are Montana in the Great Plains and northern New Mexico, southern Utah, and south-central California further west.

This species flies during the late summer and early fall. It has been collected from mid-July to mid-September in our region. It is nocturnal and comes to lights.