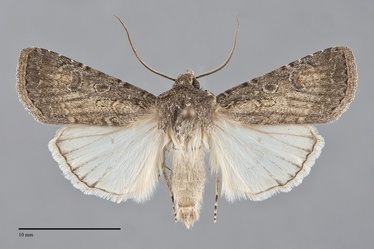 Euxoa atomaris is a common, late summer and fall-flying, small to medium-sized Euxoa (FW length 13–16 mm) with a white hindwing and light tan-gray to blackish gray forewings that are darkest near the costa and outer margin, often with a coppery cast. The forewings are somewhat powdery. The color is relatively pale posterior to the costa from the medial subterminal area to the base, with a smooth transition from this lighter area to darker and grayer on the costa and distal forewing. Specimens from arid deserts tend to be pale and those from forests, especially west of the Cascades, are dark. The lines and spots are similar in prominence, relatively obscure. The dark elements of the pattern dominate in light-colored specimens, and the light filling is most prominent in dark ones. The basal line is obscure, evident only on the costa. The antemedial line is partially outlined in gray, absent except on the costa in some pale specimens, double, filled with a light shade of the ground color, slightly irregular and angled slightly toward the outer margin. The median line is gray, diffuse and faint, often absent except on the costa. The postmedial line is gray, weakly scalloped, sometimes with a fainter smooth outer component. It is drawn toward the base on the costa, bent near the costa and again at the level of the lower reniform spot, and nearly straight at a 45° angle toward the base below the spot. The subterminal line is tan, thin, powdery, and inconspicuous, slightly irregular. The costa preceding this line is slightly darker gray than the rest of the distal wing, and a few small black chevrons are present near it on the mid-wing in a few specimens. The terminal line is gray, thin or broken into spots. The fringe is similar to the terminal area or slightly lighter. The orbicular and reniform spots are similar, outlined in variable gray to black outer and pale tan inner components, often lacking part or all of the outer dark component, and filled with the ground color or light to dark gray. The orbicular spot is oval and the reniform spot is kidney-shaped. The claviform spot is black, weak to normal, thin, small to moderate-sized. The hindwing is white in males, marked with a dark terminal line and dark veins near the margin or more extensive in a few specimens. Females have gray hindwings with a dark gray shade on the outer half, dark veins and terminal line. The fringe is white with a gray base in dark specimens. The head and thorax are powdery and match the forewing color. The male antenna is biserrate with long fasciculations. Euxoa atomeris is a member of the subgenus Pleonectopoda. This subgenus is defined by a twist or coil of the male vesica near the base. Unlike E. atomaris most members of this subgenus prefer high latitudes or altitudes.

This species demonstrates geographic variation in our region. Most of the specimens from western British Columbia and Washington are very dark, nearly black. Those from east of the Cascades are usually lighter, ranging from pale to medium gray.

Euxoa atomaris can usually be recognized despite its relatively drab color by the smooth shading of the forewing, light centrally and dark on the costa and outer margin without strong pattern elements. The lightly scalloped and smoothly curved postmedial line and small oval orbicular spot are good identifying marks on the forewing, as is the white hindwing with dark terminal line in males. Light desert specimens of E. atomaris can be confused with pale individuals of Euxoa misturata or Euxoa satiens. Euxoa misturata is more mottled, especially in the terminal area, and its hindwing is white in both sexes and lacks a dark terminal line. Euxoa satiens has a large oval orbicular spot, and its hindwing have extensive dark veins. Dark females of E. atomaris could potentially be mistaken for Euxoa punctigera. This species tends to be slightly larger, has a uniform dark forewing with black-rimmed orbicular and reniform spots, a few yellow scales lining the reniform spot, and a darker hindwing than E. atomaris.

The type locality of the synonym Euxoa esta Smith is from Wellington, British Columbia.

The habitat of this species is dry forests and grasslands throughout much of western North America.  In the Pacific Northwest, it is common east of the Cascades in dry low to middle elevation habitats such as sage steppe and open forests of ponderosa pine or juniper woodlands.  It is frequent in low-elevation dry grasslands, oak savanna, and oak woodlands west of the Cascades in Oregon and near the Gulf of Georgia in western Washington and British Columbia. It is less frequent in spruce-fir forests.  It is less common during wet years than during times of drought.

Euxoa atomaris is found in the dry interior of the Pacific Northwest as far north as southern British Columbia. It also occurs west of the mountains, limited to the dry region near the Gulf of Georgia in south-western British Columbia and Washington but more extensively in western Oregon.

The range of this species includes much of the American West to the Great Plains in North Dakota and Kansas. It occurs north to southern Alberta and British Columbia and south to the central parts of New Mexico and Arizona and southern California.

The adults fly in late summer and fall in the dry interior of our region, usually from late August through September. The populations from west of the Cascades fly slightly earlier in the season. This species is nocturnal and comes to lights.