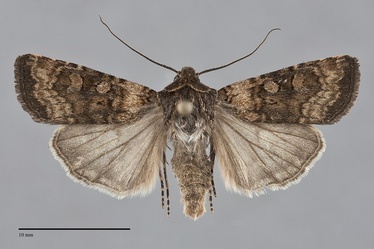 Euxoa infracta is a small to medium-sized Euxoa (FW length 13–16 mm) that flies in forests east of the Cascade summit during late summer. It has dark black-brown forewings with copper-brown antemedial and subterminal areas and filling of the spots. The basal, median, costal subterminal, and terminal areas are similar blackish brown, while the antemedial and the rest of the subterminal areas are brown with a copper tint. The cell is black, but this is inconspicuous against the dark median area. The basal, antemedial, and postmedial lines are black, double with similar components, filled with the coppery brown color. The basal and antemedial lines are slightly irregular, oriented perpendicular to the wing axis. The median line is absent. The postmedial line is weaker than the other lines, nearly even, pulled basad on the costa, slightly concave opposite the reniform spot, and angled 45° toward the base below the level of the cell. The subterminal line is slightly lighter than the ground color, slightly irregular. It is preceded by a dark brown-gray shade across the entire wing. The fringe is concolorous with the terminal area. The orbicular and reniform spots are outlined in black, are moderately large, and are filled with the black-brown color of the median area. The orbicular spot is oval and the reniform spot is kidney-shaped. The claviform spot is black, small to moderate-sized, and narrow. The hindwing is tan-gray with darker gray veins, discal spot, and terminal line. The hindwing fringe is off-white with a gray base. The head and thorax are brown-black with a faint black line across the collar. A frontal tubercle is present. The male antenna is weakly biserrate. Euxoa dodi is a member of the large subgenus Euxoa.

Euxoa infracta can usually be identified by its small size, late summer flight, and dark black-brown and copper-tinted brown forewing with black markings. It is unlikely to be confused with other Euxoa species in our area. The most similar species, Euxoa campestris, is uniformly dark purplish brown wings with a more strongly-contrasting black cell and lighter-filled spots. Euxoa dodi, a rarely-collected species that is only found in western Montana in the Northwest, is similar to E. infracta in size and pattern, but is much lighter gray-tan on the forewing and lighter gray-tan on the hindwing.

This species is widely distributed in dry forests throughout much of western North America.  In the Pacific Northwest, it is moderately common in dry open ponderosa pine forests, juniper woodlands, and Douglas fir forests at middle elevations. It is also common in quaking aspen forests of the Rocky Mountain region. Euxoa infracta is uncommon on sagebrush steppe, but occurs there near the forest-steppe ecotone.

Euxoa infracta is widely distributed in dry forests east of the Coast and Cascade Ranges as far north as south-central British Columbia. In Washington it occurs in the northern tier of counties near the border with British Columbia, along the east slope of the Cascades, and in the Blue Mountains. The range appears to be more restricted in eastern Oregon where it has been found in the Blue Mountains, in the mountains of the Basin and Range province, but not in the Cascades. It is widespread in Idaho and western Montana.

The western distribution of this species extends south to southern California, central Nevada, and the northern parts of Arizona and New Mexico south of the Pacific Northwest. It is found predominantly in the eastern part of California, and does not appear near the coast except in the far southern part of the state. The eastern limit of the distribution extends to southern Manitoba, western South Dakota, and central Colorado.

This species flies in the summer and early fall. It has been collected from early July to mid-September in our region, but most records are from August. It is nocturnal and comes to lights.